In an effort to seem more light-hearted and fancy free, I have devised a series of mini-blogs devoid of the ever-present cynicism of the others...

You know the 2010 midterm elections are right around the corner and the decision of who to vote for to represent your state as Senator can be a difficult one. (Unless your state does not have a seat coming up for election) Not for me though... It is a no-brainer.

I am a resident in a state where no candidate is compelling. The Democrats usually run the first guy they meet on a street corner. Whereas the Republicans are currently engaged in a bitter turf war between a corrupt ex-Congressman/ Sportscaster and the man who introduced Sarah Palin to the American political scene.

I know what you are thinking... Not third party, Manny... No! Anything but that, why don't you just throw your vote away. Have no fear Kodos; I am hitching my proverbial wagon to this third party candidate, he is not only the most qualified but also the most adorable... Sorry John McCain. 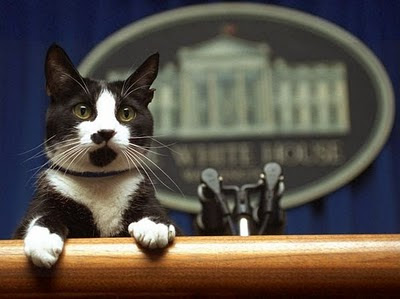 Meet Roscoe P. Meowington III, he's an American Shorthair with a simple agenda, a fish in every home stewing in a pot. He is good with kids and professes to be "lovable, playful and has a working knowledge of the litter-box." His platform is standard "green" fare, he has strong environmental ties and thoroughly despises corporate intrusion into government. There is a downside however, he has strong antipathy to canines... I suppose they all can't be perfect.

VOTE Roscoe P. Meowington III for US Senate: Because there is no one better!
Posted by Manfred "Manny" Funkowitz at 7:48 PM