You Mean This Tea Party Does Not Have Any Earl Grey or Scones? Gyp! 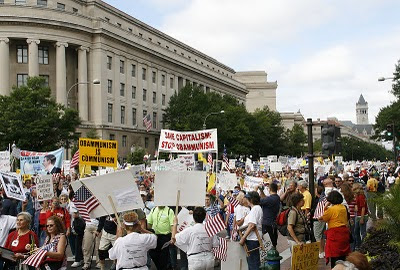 I would be hard pressed to find an individual(s) who has not heard of the Tea Party "Movement." Now, I know what you are thinking... The original Tea Party ended nigh two and a half centuries ago and thus such notable Sons of Liberty members as Samuel Adams, Paul Revere and Patrick Henry have returned from the dead --natch-- to feast upon the flesh of the living. Put down that twelve gauge and fear not, for dead hath not risen to lay siege to the living... Quite simply, the Tea Party "Movement" is the hot new craze sweeping Conservative politics. Perhaps, it was a tad premature to ask you to refrain from mass panic.

From the perspective of the most casual observer, the Tea Party "Movement" is full of sound and fury signifying nothing. While the group claims to not be partisan in its disdain for politicians, Democrats are the favored victims (or anyone who voted for health care reform) of this groups misguided wrath. I am not going to hop onto my trusted steed, Wally and charge to the aid of the Democratic Party that would be entirely pointless. For you see, the thought-process of the individuals who participate in this particular method of political action is illogical.

My detractors with assume --incorrectly-- that is just me tapping into my fervent distaste for all things Conservative. Before thoust protest much, allow me to illustrate my point. The Tea Party Movement is about as objective as Fox News is to Fair and Balanced. The principle beliefs or tenets of the movement are the oldest plays in the new Conservative manual. They are the golden oldies... "hatred" for large government, excessive spending, the stimulus, the budget and --number 5 with a bullet-- the financial bailouts. You might noticed that these themes have been present in American politics before. They are --verbatim-- positions spearheaded by the Republican party to obtain votes from those who are ignorant of American politics. The message never changes nor does a Republican Administration or Congress ever deliver on its promises (consider 2000-2008), however, they do enjoy tax cuts, excessive deficits and cream soda. (Everyone loves cream soda)

Furthermore, this "Movement" is the most inorganic "grassroots" organization (it is for all intents and purposes, a product of AstroTurfing) in the history of grassroots politics. Chris Good explains organizationally, the Tea Party "Movement" is guided by "three national-level conservative groups," Dick Armey's FreedomWorks, dontGO and Americans for Prosperity, so its label of not being partisan is well... absurd.

I understand it, people are a tea'd off and rightly so, we (collectively, regardless of our political dispositions) have been failed by those who we elect, they hold Corporate interests before their constituents and the nation they serve. Chomsky--ahead of the curve yet again-- argues "People want some answers. They are hearing answers from only one place: Fox, talk radio, and Sarah Palin." It is time for people to start marching to the tune of their own respective drummers and formulate their own beliefs... not to cling to aging political cliches and rhetoric. 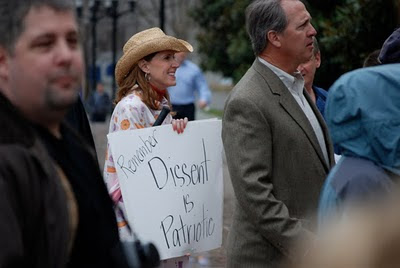 When did it become fashionable to be a dissent again? I spent the last decade being told that I was a coward if I didn't goose-step in line with the political sentiment at the time. Outrageous. Where's my paper bag? I seem to be hyperventilating again...
Posted by Manfred "Manny" Funkowitz at 11:15 AM