PORTEmaus Book Club Review No. One: 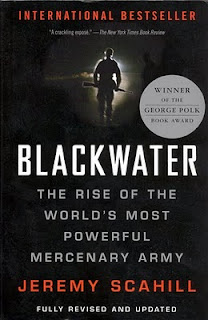 How far have we progressed as a nation that a subject such as a private military, mercenaries or "contractors" is a polarizing one? It seems many of us have our priorities confused. You know when I enter the ballot box, the use of mercenaries is a hot button issue. I have to think to myself: "I know where Candidate X stands on education, the separation of church and state and the economy but I am placing my vote for Candidate Y because he will grant no bid contracts to private contractors to conduct combat operations in foreign locales."

At the heart of Scahill's book is the privatization of the American military apparatus beginning under Cheney in the 90's, ultimately reaching its apex during Rumsfield's tenure as Secretary of Defense. The most disturbing aspect of this departure from a government controlled military to a privatized one is the use of contractors who are not subject to the same laws as conventional soldiers.

The story of Blackwater is the proverbial Conservative wet dream, at its head is a wealthy Christian who views the War on Terrorism as the Crusades renewed. It cannot be said that Erik Prince is not a man without principles, in the American world of political lobbying, money is usually spent to entice politicians on both sides of the aisle, however he won't throw a dime to liberal politicians. This brand loyalty has served him well during the Bush years as Blackwater was granted lucrative no-bid contracts to perform protection, security, training and combat operations in Iraq, Afghanistan and even in Katrina ravaged New Orleans.

A lot of the criticism directed at this book references how it is left leaning in its presentation. Those who feel that way are missing the point of Scahill's analysis/ argument. The point is not that a Republican administration sanctioned the use of "contractors" --they might be more inclined to do so but lets face it, their usage is non-partisan-- but rather the implications to Democracy --domestic or abroad-- over their usage. It is disparaging that the Bush administration bent over backwards to make such mercenary groups as Blackwater, DynCorp and Triple Canopy immune to prosecution under the Uniform Code of Military Justice --for its actions abroad--, they even repealed the Posse Comitatus of 1878, thereby allowing the military to act as law enforcement in Post-Katrina New Orleans. (Now, such legislation reverts to the Insurrection Act of 1807) These points are lost on loyalists incapable of seeing the big picture, it is not a partisan issue, these are the same individuals who fail to understand that dissension is a healthy element of American politics. Perhaps, they genuinely believe that companies such as Blackwater should be firmly entrenched in the United States military structure and thus they are crazy, which is beside the point.

As far as the presentation goes, Scahill provides the reader with a wealth of information. He explains the adverse effect of privatizing military operations and how companies such as Blackwater furthered corruption in government, while also strengthening the military industrial complex.

The book encompasses many different topics pertaining to Blackwater, its humble beginnings to it meteoric rise to the top of the mercenary industry. For me, the chapters dealing with the company were not the most compelling... In particular, the Cover Black chapter. Scahill was at his best when he describes and examines the actions of the company in Iraq or how they actively recruited and employed Chilean mercenaries --Many of which worked for Pinochet-- for a pittance. It was chapters like these that you get the full picture of how heinous a company like Blackwater is and their blatant disregard for civilians and ethics.

At its worse, the book tended to be repetitive on some points. However, I can understand this technique as one assumes it was used to "hammer" a point across. (Such the aforementioned ethical concerns etc) I was hoping that Scahill would have expanded on the deployment of Blackwater domestically and its consequences in regards to the Constitution/ American democracy... But, alas, it was not to be.

Overall, I found the book to be a quick, easy and altogether informative read. I think that the criticisms of Scahill's perspective are absurd, given that nature of the subject (Now, if this was a book about abortion, I would understand it.) and especially since public opinion of the company is so low they had to change their name. (Blackwater or Xe --as it is now known-- has since been put up for sale.) While this was not the best book which dealt with Iraq that I read this year... One does learn much about the shadowy company that has hidden behind the euphemism of "Private Contractor" and whose exploits have been far from innocuous.
Posted by Manfred "Manny" Funkowitz at 1:19 PM