Oh Sweet Darwin, Your Theory is Fantastic, As Is Your Facial Hair.

Like most simple folk, I lack the faculties for advanced scientific thought and thus I am truly in awe of new found discoveries from the realm of science. Maybe, in an alternate world, I am a scientist and not a hack writer posting to a website with a readership less than 10. Not likely but that is neither here nor there. It seems that scientists have finally identified a rare pink fish as a new species that "uses its fins to walk, rather than swim, along the ocean floor."

Take a gander at the following pictures. 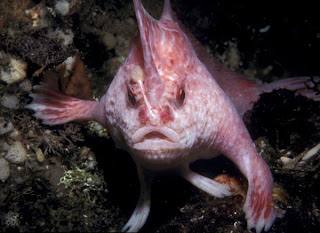 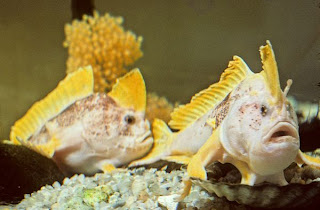 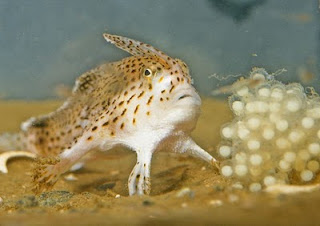 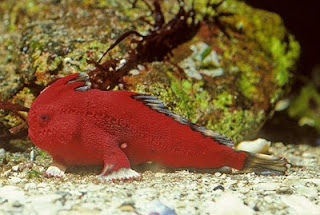 One has to wonder at the possibilities that this discovery entails. Quite possibly, long after you and I have died, there might be anthropomorphic fish hoofing it through our cities, mingling with people at coffee shops or playing free form jazz on a street corner for change. Perhaps, Darwin might get his due and evolution will finally be recognized as an undeniable science.

Then again, the last time a pink variant of the handfish has seen living was 1999... So, in all likelihood these fish might not see the next step of the evolutionary ladder and will simply become the dinner of a bigger fish with fins. Thereby, illustrating that fish are better off with fins not feet. Of course, I can't help but think of the whole thing going horribly wrong and looking something like this: 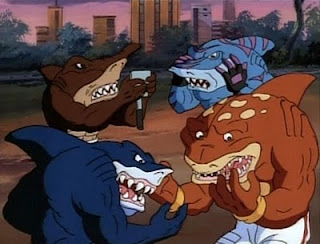