Better Get That Bucket Out, The Boat Is a Sinkin' and Feeble Politics is not Going to Save It.

Let's venture into the absurd, shall we. Do you have your thinking caps on? Good. Here we go...

What in the world is wrong with John McCain? (Besides, the obvious philosophical deficiencies) The road into insanity has been a long one for the --self-described-- maverick. Of course, there were the pictures of him hugging on Bush, picking Palin, watering down legislation on torture... All understandable, I mean I get it. He just wanted to be President, soooooo bad.

So, what is his deal now? Check out one of his fantastic billboards for his reelection to the US Senate: 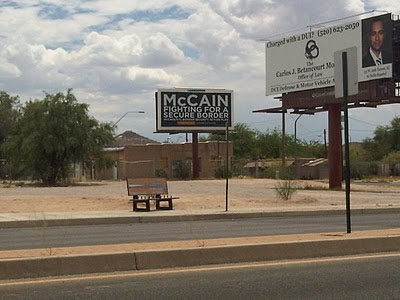 Much like Campaign Finance Reform, anti-torture legislation and his political ambitions, McCain is what one would consider a lame duck. Then again, his political inadequacies aside, he remains a highly delusional legislator.

Seriously, regardless of one's position on the immigration debate (If you could call it that, it just sounds like good ol' racism to me)... What exactly has McCain done to secure the border? Has he been patrolling the border himself with an M1 Garand in hand? What we are witnessing is McCain engaging his favorite brand of politics, no not Maverick but rather sycophantic politics. (In this case, those with racial issues) Which if you followed his career --in the most cursory way-- is the only politics he knows. It is sort of sad considering he can't defeat a disgraced and corrupt former Congressman easily. 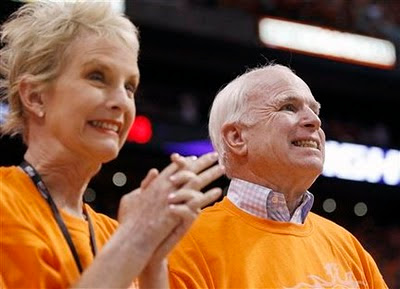 I suppose if he spent more time a politicking and less time on looking stylish then he would not have these problems.
Posted by Manfred "Manny" Funkowitz at 2:37 PM