Global Military Hegemony... Pish Posh, Tis Nothing More Than Politics As Usual... Now, Everyone Go Back To Watching WifeSwap. 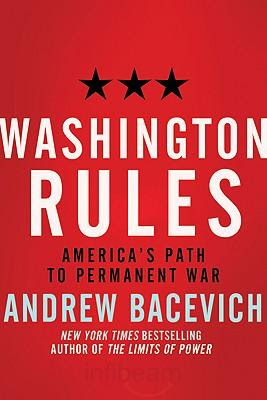 Have you ever wondered why it seems like history is repeating itself? Does it feel odd that our nations history cannot be separated neatly into four or eight year blocks? Many people --myself included-- feel that the particular brand of politics (or more generally... policy) emanating from Washington is detrimental to not only individual citizens but also our standing in the eyes of the world.

This might seem like a common sense assessment of the United States status as a Superpower or the War on Ideological Concepts but it does not explain why the policies of one presidency closely resembles that of its predecessor. Specifically, how can the war in Afghanistan (which began under President Bush) become Obama's war?

These concepts and other corollary's (perpetual war) is the core of Andrew Bacevich's book. It is for this reason that it has been suggested and selected as the PORTEmaus Book Club book for August. Hopefully, one will consider it relevant and not too dense.

Addendum: I think a trend has begun to manifest --for the club that is-- and it goes a little something like this... Non-fiction-Fiction-Non-fiction... This was not a conscious decision but it seems like an obvious route to go... At the very least, it is a natural one to take.
Posted by Manfred "Manny" Funkowitz at 2:19 PM