If You Cannot Release Your Book Through the Normal Channels... There is a Good Chance That it is Awful.

What happened to the hiring of a literary agent and publicist when an author is attempting to get their works published? Those days are long gone as authors are side stepping the --standard-- process by promoting themselves. Who could think of better way than hurling their tome at the President of the United States? 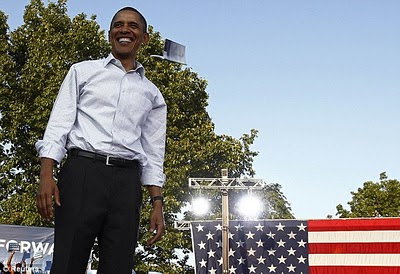 Seriously, you know you are at the end of your rope when this seems like a logical idea. Of course, who really wants to be published digitally on Amazon and take home upwards of 40% of the profits? Genius' that's who.

Thankfully, this future Hemingway was not charged with anything criminal... When I first read the story, I thought it was some tea partier and his new romance novel about the love between the elite and tax cuts.

In this case, truth is much sadder than fiction. I wish I knew what the novel was about. I want to believe that it was about robots in the future teaching statistics to morlocks and octogenarians at a community college. Its a story of loving and learning, heartwarming stuff.

What makes this story great is how stupid does someone have to be to do this? There probably is a reason why your book has not been published, went unsold and then was either remaindered or destroy. If I was to hazard a guess, you probably do not have the talents or chops to be a writer. Hate to be the one to break it to you... Unless, this was your business plan all along.

Before I read this story, I immediately thought back to another story involving an object being thrown at a world leader. At least a shoe making its way at the noodle of the most powerful man in world had meaning... 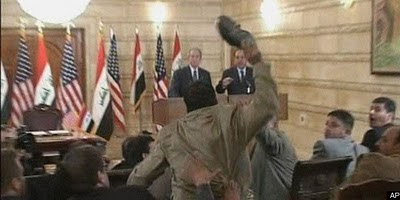 This savant (book not shoe thrower) wanted to make a name for himself before fading back into obscurity. Ironically, no one knew his name before the incident and no cares to know it afterwords.
Posted by Manfred "Manny" Funkowitz at 12:52 PM