"Given Enough Time I Could Move The Earth": The Prestige 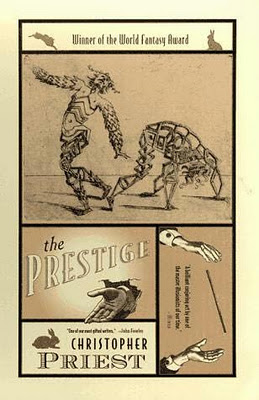 The Prestige by Christopher Priest
I will admit that the only reason that I had heard about this book was because of the Christopher Nolan adaption. After the film was released, I recall waltzing through the Magic Kingdom with Bence (years ago), he kept talking up the novel and was like "borrow my copy, you have to read it, it is a great book." For one reason or another, it took three or so years and a trip to New York but I borrowed that book. I am glad I had, Christopher Priest has written an original and enthralling novel about retribution between two magicians at the turn of the century. For those feeling that they saw the movie and thus, do not care to read about the book, I will say this, "if you had to read this book for a book club and opted to watch the movie to cover your bum... You would look like a fool." The book and its adaption are two different beasts.

With that said, this kind of nullifies the age old debate about which is better, the book or the film adaptation. The story is drastically different in the book. Rupert Angier does not lose his wife but rather his unborn child at the hands of Alfred Borden (it was not intentional). Throughout their feud, there are multiple instances where Angier or Borden express a desire to end the feud. Most importantly, the book follows the stories of the descendants from both magicians. However, the escalation of the feud (creation of tricks that culminated with The Transported Man and Angier's variant created by Nikola Tesla) is roughly duplicated in the film.

It is painfully obvious that I enjoyed both the novel and the film adaption of it, yet I will confess that the book was far from perfect. Namely, I found that the chapters that focused on relatives (with the exception of the Prestige chapter) to be dreadfully dull and ultimately went forgotten while reading the Borden and Angier diary entries. It was not that those chapters (this is a loose term considering the book is not split into chapters in the "normal" sense) were not interesting but simply did not hold my attention as the Borden/ Angier parts which was the bulk of the book.

I must admit that this book was a welcome change of pace from what I had been reading to date. Then again, you shan't find the same compelling characters in the pages of a text book (After all, they are more concerned with facts and talk about dull). Anyway, I thoroughly enjoyed this book not only because of the characters and how it fleshed out the duel between Angier and Borden but also because of how it re-frames the book versus adaptation debate. Honestly, I think they both (in spite of their apparent differences) compliment each other very well. You might be wondering which I liked more, the novel or the film and I am not sure I have an answer. Sure, Nolan's film is great but there is something about this novel and the territories that explores. Regardless, I can safely say that one is not better than the other.

Parting thought:
Much like Bowie's cameo in the film, the part of the novel featuring Nikola Tesla kind of steals the pages in which he appears.
Posted by Manfred "Manny" Funkowitz at 4:00 PM