The Conductor Wishes to Alert You That the Film Foray Cavalcade is Leaving the Station! 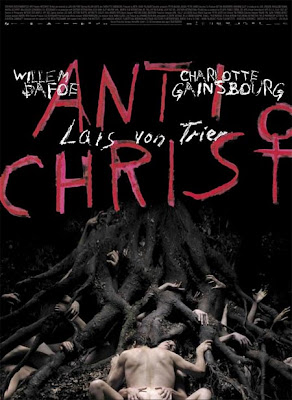 I love the Criterion collection. There I said it. Of course, their films cost an arm and a leg on Blu Ray but they are worth it for the accompanying essays alone. When they release films they take the utmost care and consideration to release the best product possible, whether it is a wealth of special features or offering the best transfers of video and audio. They have missed the mark some times with such releases as the Rock and Armageddon but overall, their catalogue is unrivaled. One disconcerting thing is the addition of untried --by the test of time-- films such as Benjamin Button or the --focus of this article-- AntiChrist to name a few.

I would like to begin with by explaining that I was looking forward to watching AntiChrist for a long time since I missed it during its short run at a Tucson "art" theater. When I first saw its Blu release, I was glad that my chance had come. I went into watching this film with an open mind, I knew it was going to an "off-putting" and "controversial" from the reputation of the director alone. (The name also helped with this) The film had some decent buzz at Cannes, was nominated for some equivalent of the Oscars in Denmark (which they won all of them) and fizzled here in the states.

I attempted to like this film, it had an amazing video and audio transfer (Thanks, Criterion) and the cinematography was top-notch... Sadly, this was the extent of what was good about the film. There was nothing (and I mean nothing) in the realm of character development. For those not in the "know," the premise is this: a couple's son fell to his death (because they were too involved in coitus to lock their windows), wife has mental breakdown, they visit their cabin, wife goes further into insanity and ultimately husband kills wife. I understand that the loss of a child can be traumatic but at one point, She (Charlotte Gainsbourg) admits that she knew the child could push a chair around and would do so often. At that point, I was done caring and all empathy as a fellow parent was lost.

I must also confess that this is the first film of Von Trier's that I had seen but I did a little background research into his style of film making. I do not consider myself a prude in the realm of violence or sex on celluloid but this was both ridiculous and gratuitous. Case in point, during the opening sequence, let's cut to an unnecessary shot of Willem Defoe's penis penetrating Gainsbourg... Seriously, this serves no purpose as we can see that they are having sex. This film simply pushed the button for the sake of doing. Whether it was the acts of violence, genital mutilation or the multitude of animals giving birth in front of "He" (Defoe).

I had tried to like this film but once the credits rolled, I had one mission... Get this film off my shelf of films. There is no deeper meaning to this film as the lack of character development and realism precludes it. Many people in this world have lost children, I doubt many of the women involved decided on genital mutilation, attaching a carving stone to their husband's leg or going completely psychotic as a means of dealing with it. Oh wait, those are the six, seventh and eight stages of grief.

The are many people out there who feel that this film deserves a second viewing and then the whole film makes sense. How is that possible? At the end, I was hoping that both of them would die because I could not make myself care about the emotional plight they were facing. The lasting impression of this film upon me was one of a misogynistic mess.

The sad fact... When I placed this film on Amazon for sale, it sold in an hour.

Recommendation: Avoid and bask in the time saved... Fly a kite or feed some ducks.
Posted by Manfred "Manny" Funkowitz at 10:33 AM