Do You Enjoy Horror Films? Do You Like Zombies? Then You Will Most Likely Hate This Film.

Film Foray Cavalcade No. Tres: Day of The Dead 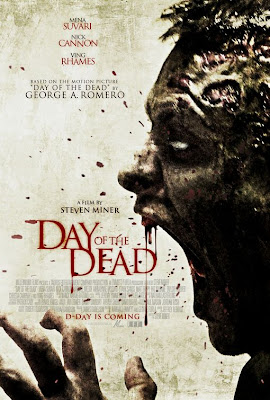 Day of the Dead
I suppose I must begin by explaining that I had previously avoided this movie like the plague. The reviews were awful and they noted that the film had no redeeming value. I wish I could say that I sat down and watched it because the Dawn of the Dead remake proved that remaking a film could lead to something just as good as the original (Of course, it also make us believe that Zack Snyder could direct a film but we all know that is not true... Watchman being the exception). I could easily end this review by saying this film was awful... Downright dreadful and practically unwatchable.

Oddly enough, a good time was had by all when we watched it. I guess it had a lot to do with the fact that a friend and I sat making fun of it while our significant others sat angry at our continued interruption of this cinematic gem. When I think back to the movie, there is not one redeemable aspect to it. Seriously, for a movie call Day of the Dead, you would at least expect it to take place during the day. Some would say that would be the first clue to a movie chugging... The second would be good old Nick Cannon, the forerunner for this generation's worst actor award.

I understand that for a horror film that some of the violence and "scares" would take place off camera but 98% of it? Perhaps, it was because not one of the people playing a zombie were convincing as one. In particular, was the Stark Sands character who exists on screen like a zombie but once his character turns into one... Well, then he looks like a two bit hick. One would argue that he mixed up his characters but anyone who has seen Generation Kill knows that the guy can act... Although, I concede that I have not seen him act in anything else so that might have been a fluke.

I do not want to sound negative but the film misfired on all cylinders. The story was tepid and the dialogue was piss poor. None of the actors playing soldiers knew anything about military hierarchy or how soldiers conduct themselves. Then again, when you have Mena Suvari staring as a badass corporal, you know you have a problem. I was overjoyed when Ian McNiece (Anyone watch Chef?) showed up but he was basically there to play an idiotic fat man. In the end, if I were the producers of this film, I would have had the actors to sign confidentiality agreements(to never mention the film), remove the links/ information from IMDB and collect all footage, work prints/ final cuts and burn them. Thereby, keeping it from becoming part of the collective human memory... Now, I need to find a way to get it out of my mind.
Posted by Manfred "Manny" Funkowitz at 11:55 AM

Email ThisBlogThis!Share to TwitterShare to FacebookShare to Pinterest
Labels: Day of the Dead, Film, Turd