Personally, I Enjoy my Catfish Tuscaloosa-Style with Corn Bread, Rice and Slice of Lemon... 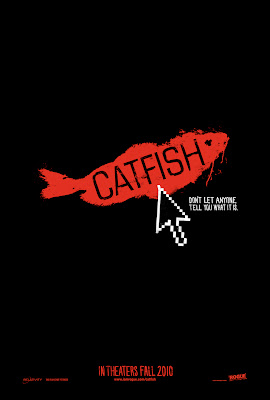 This entry comes by way of a recommendation from a coworker of my wife's (His second recommendation was one of the worst documentaries that I have ever had the displeasure to view). There is much conjecture as to the veracity of this film as a documentary. Whether the events are true or not is quite irrelevant to what is ultimately "good" about the film.

I tend to disagree with reviewers who considered the film to "jaw-dropping" but at the very least it is thought provoking. The film is a case of Occam's Razor and it is quite easy for the viewer to make simple observations that ultimately turn out to be correct. For those unaware of the premise of the film, it follows a photographer as he virtually a seemingly perfect woman (the sister of a eight year old painting "prodigy") on Facebook while his brother and his collaborator document the experience.

Call me a cynic but there is a reason the old adage "If something sounds too good to be true, it probably is" has persisted. Lo and behold, the film reinforces this statement... It seems that with the perfect woman on Facebook, nothing is what it seems. While the film documents the psychology behind virtual relationships, most reviews have refused to highlight something that has personally stuck in my craw. How can somebody be so woefully naive?

I understand the concept of desperation but from the beginning when the art of the eight year old arrives that something is amiss. The focus of the story is that this is a virtual relationship but really it is a tale of psychosis on both the part of Nev (the photographer) and virtual woman Megan (or rather the person who really was Megan). Both have blatantly lost touch with reality, one with the belief that online persona people exhibit are completely truthful and the other resides in a world of her own creation.

As I mentioned earlier, I am less concerned with whether the film is real or fake... I thought that its portrayal of what constitutes a person virtually was interesting but overall I found the film to be simplistic. It was not difficult to see where it was going and I am kind of shocked that a viewer would take this at face value. This would make the viewer no better than Nev in the grand scheme of things. Overall, it was interesting to witness the ugly side of Facebook besides the chucking of virtual livestock, poking or the feuding between fourteen year olds.
Posted by Manfred "Manny" Funkowitz at 6:03 PM