Woes of a disenfranchised Knicks Fan 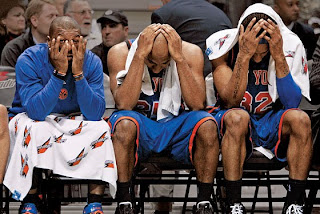 For those of you who don't know "The Gonz", somethings you should know about him are the following:

-He thinks your favorite rapper sucks

-He is a recovering Peanut Butter Addict

-And he sometimes talks about him self....in the 3rd person....riiight.


Most importantly he (sorry..I) was born in New York City and subsequently is a New York Knicks fan. So you can imagine my delight when the Knicks acquired Carmelo Anthony and Amar'e. Finally! We'd be relevant. We'd be on cable channels and most importantly we would have celebrity douche nozzles fill the Garden again. I'd be able to wear blue and orange in public again and not be ridiculed by Suns fans with all of their team's championships and whatnot.

But alas, we had a slightly above average season and was forced to face a team in the playoffs that resides higher on the evolutionary chart. We were swept. And in the mean time teams from Oklahoma and Tennessee destroyed established teams with a smile. New Yorkers however, for another year could not give a shit about the NBA.

Wake me up in October.
Posted by Gonzi Supreme at 3:17 PM