If it is not Being Used to Declare the Peanut Butter and Jelly as National Sandwich, I Would not use the "Autopen." 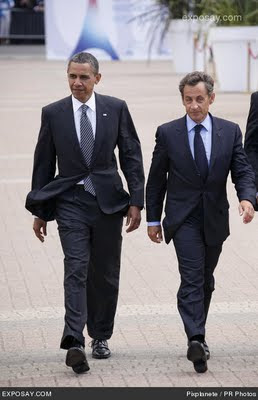 God bless technology. Not only can a person play Farmville on their cell phones, the President of the United States does not even need to be physically present to sign legislation, now can do from the other side of the globe. What a globe trotting multitasker! He can extend unpopular legislation and meet with noted European dream boat Nicolas Sarkozy without breaking a bead. This would be a great technology if he was being asked to sign a document declaring a national park or declaring September 20th National Papercut Day (You know to mourn the senseless victims in paper's war on fingers).

Now, I have a firm beef with what he used the "autopen" to sign into extension. The Patriot Act is one of the most intrusive acts of legislation created in the United States. I mean, it restricts librarians from notifying that the FBI has requested to see your library records. So, you best not be reading anything incendiary such Judy Moody Predicts the Future or Fancy Nancy, otherwise you might be "rendered" to Yemen. If that does not bother you then how do you feel about the "sneak and peek" searches being able to be conducted for another four years? All this happened with the swipe of an electronic pen and doubtless a tear was shed.

Collective groans aside, the Patriot Act has and will always be a reckless example of political legislation. Some would argue that Obama extended it because he did not want to appear soft on terrorism (This should never be the primary motivator for passing anything but I suppose that is the tightrope a politician walks). I thought that argument ended with the death of Osama. I guess that cache has already expired since Fox News asserts that it is essential a victory for waterboarding. Damn.

Where do we go from here... Looks like my hopes for Obama's presidency have been dashed yet again since the Patriot and FISA acts continues. This has been a criticism that has followed their passage during the Bush administration into the current one. With how controversial the legislation is, you think the President could have taken the time to sign before he took his trip or maybe the houses of congress could have finally debated the effectiveness of it before rushing (like they have always done) to the President on the cusp of expiration. If I were a betting man, if it expired, it would never be made into law again... A man can dream.

Postscript: Call me a purist but when dealing with an issue of this nature, I think it would be better to show that is something important rather than afterthought. The whole Patriot Act situation or refusal to have the fortitude to just say "I am going to let it expire, lets put together a better piece of legislation that does not put every citizen in the same boat as potential terrorists" kind of bums me out. I sense another groan coming on...
Posted by Manfred "Manny" Funkowitz at 12:04 AM