You are DAMN right his curtains are drawn and he will not answer the doorbell!

This morning began with a lark via text:

(Brother Funkowitz) "Is the world over yet?" 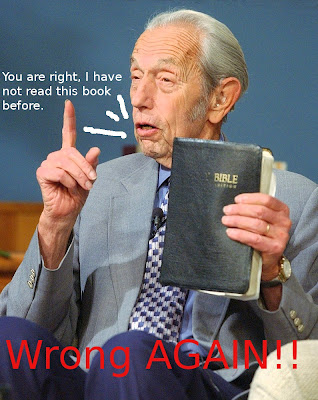 ...Surprise, Surprise, no it is not over. The world still turns and we are still here. Reuters reported that the master of numerology himself, Harold Camping has holed himself within his home, windows closed, curtains drawn and he would not answer the door. If I came up with the theory equivalent of Swiss cheese, I would not answer the door either. When held up to simple questions (for instance, why is God going time zone by time zone?) the whole thing falls apart. Then again, it never made sense anyway.

Couple it with the fact that the guy is not a licensed pastor (it is not that difficult guy, you can do it on the Interweb), who erroneously made the same prediction in 1994 and he has --you guessed it-- he has ZERO credibility. The worst part is that it gained traction in the past week. I am left wondering why the media insisted on running something so completely STUPID and not focusing on news that matters. Mind you, I am not speaking about the events that take place in the bible but Harold Camping's altogether moronic version of how it plays out.

You might think, "whoa there pardner... no need to resort to name calling." It is difficult not to. I am wondering who could willingly believe someone who obviously suffers from dementia? There is nothing within his "prediction" that would making a "thinking" person say "wow, I better get my act together because what he is saying is legitimate."

I am now going to offer my prediction, we will never hear from Harold Camping unless we willingly turn to his radio station. This actually is more advice than a prediction. Nobody buys what you are selling... You know how people spent their "last" hours? Doing what they normally would do on a Saturday. It seems that not everyone was dumb enough to quit their job, waste their savings and hope for ascendancy into heaven. So, where is Harold Camping..? Hopefully, he is like those Hale-Bopp gents and drank a cup of kool-aid.
Posted by Manfred "Manny" Funkowitz at 6:05 PM