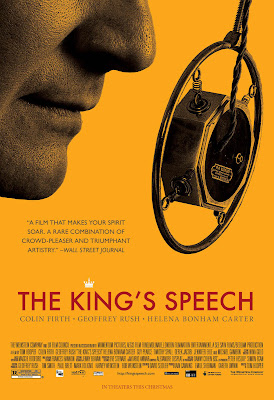 The King's Speech
As I look back to last year in film, I am shocked to see where I placed The King's Speech on my top ten list. Sure, 2010 had some great films released but honestly to rank this film so lowly is kind of a travesty on my part. At the very least, it was the highlight of my week long excursion to Tucson in January... That warrants being ranked higher than seven. Anyway, the desire to revisit this film has been in my mind since before the Oscars (we all know my enthusiasm for that particular awards show and I have long been curious to whether or not the film holds up on a second viewing.

For those who have not seen this film (after all, not everyone is a fan of richly crafted European cinema), the long and short of this film is that Prince Albert or "Bertie" has a debilitating stutter and has enlisted the help of Lionel Logue to assist him in overcoming it. I would go further in depth with the plot but I am going to approach this as a retrospective of this film. The question must be asked, on a second viewing how does The King's Speech fare? On the initial viewing, I left the theater excited and the feeling was there after the second time watching it.

There was the debate about whether or not this film was worthy of the Oscars bestowed upon it. The answer is a resounding yes and I know that many of you will be confused considering its placement at number seven on my illustrious list. Worthy yes but there were some difficult decisions. The Best Picture Oscar is the murkiest since their are ten choices and honestly, Inception and True Grit was stiff competition. Even now, I cannot seem to pick my favorite out of the three but to say that this film did not deserve it but films like Chicago or Shakespeare in Love did is doing it a disservice. 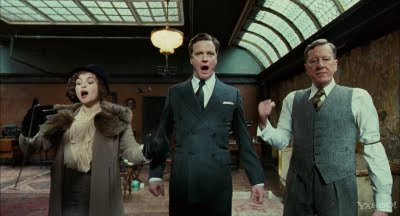 Colin Firth's performance definitely demanded an Oscar. Yet, I cannot shake the thought that it was mostly driven by the fact that he was stiffed by the Academy for The Single Man. Yes, this performance was leaps and bounds better than Jeff Bridges... Hate to break it to any detractors out there but Firth should have two statuettes. Best Original Screenplay presents another murky choice between it and Inception (number two on the list). It is kind of a travesty that Christopher Nolan does not have an Oscar on his mantle.

Continuing on that same thought, Christopher Nolan's absence from a nod for direction is why Tom Hooper won an academy award. Of course, that is not to say he did not deserve the award... It kind of goes hand in hand with the winner of best picture. Anyway, none of the directors wowed me like Nolan did but I would say that Hooper would be my second choice. I apologize Bence but Black Swan was good but not great and Aronofsky for the win would not sit right (Possibly for The Wrestler or The Fountain which were better all around films).

To bring this retrospective full circle, I would like to move The King's Speech up in the rankings and having seen Black Swan a second time (and leaving with a feeling of being underwhelmed), the latter would be moved down. From the perspective of accolades it was said that this film did not deserve Best Picture, with the prospect of picking from three home runs (The Kings Speech, Inception or True Grit), I would hate to have to choose my favorite. They were all beautifully shot, expertly written and the acting was the tops.

So, for those keeping score, The King's Speech was better on the second viewing. If you have not checked it out, make your way to the nearest retail establishment.
Posted by Manfred "Manny" Funkowitz at 9:54 PM