Now, That is What I Call Investigative Journalism... The Direct Link Between Monkey in Space and Doom. 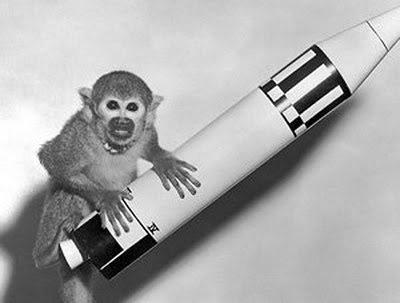 Iranian President Mahmoud Ahmadinejad is incorrigible. I am not speaking about his innate anti-Semitism, his support for Hezbollah or even his country's alleged pursuit of the atom bomb. While all of these aspects are right for condemnation (and one would be right to do so), I am speaking about the desire of President Ahmadinejad to send a monkey into space! The Rascal! To think he would aspire to send a monkey, chimpanzee or any other primate is not simply absurd but downright mad! What does he think this is... The nineteen fifties or even the sixties?

With the Iranians pursuing entry into the upper echelons of the atmosphere, this has caused many in the West to be alarmed. It seems that every other country is allowed aspirations into space but Iran's space program is inexorably linked to the previously mentioned nuclear ambitions. For those keeping track, space plus monkey equals nuclear annihilation. Satellites delivering nuclear warheads are the thing of Bond films or dime store science fiction. At the very least, the Iranians are placing reconnaissance satellites into orbit. There, does that not make you feel more at ease?

How about the fact that this was not the first foray of the Iranian Space Agency of sending living animals into space. It seems that previous payload included a rat, two turtles and a fistful of worms (I do not know if a can was involved) and yes, PETA... All of these animals made it back alive and kicking. Thankfully, their were no gamma rays involved or we might have the following on our hands: 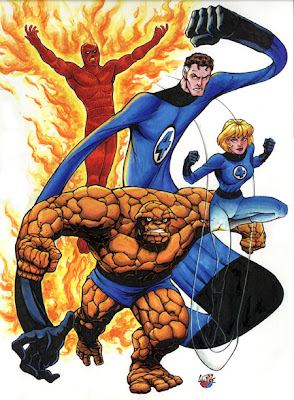 These super beasts would be more powerful than any earth bound nuclear warhead and to imagine an army of these gamma fueled soldiers would strike fear the likes of which the world has not seen since this. It would be foolish of me to assert that I know anything about the true ambition of the Iranian Space Agency or the ultimate goal of Iran in space. It is completely irrational to assume that they simply seek to hurl nuclear missiles from space... After all, this would be running before walking, so to speak. I might have failed earlier to place your minds at ease but hopefully this little factoid will... Iran was one of the twenty-four founding members of "The United Nations Committee on the Peaceful Uses of Outer Space" which was created back in 1958. Now, I can safely wipe the sweat from my brow.
Posted by Manfred "Manny" Funkowitz at 10:33 PM