For your LACK of consideration...A Gonzi PSA 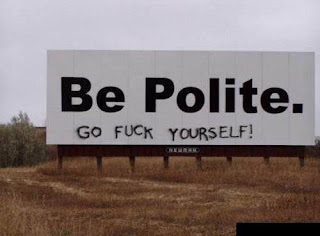 You know...you may not know it by some of the things I've said here...but I like people! I do! I like people. I like people so much in fact that I'm constantly thinking of ways that I can make peoples lives around me easier. Whether it be holding a door, helping someone pick up stuff they dropped, or stop a gun wielding robber with nothing but a sock and a couple rolls of wrapped nickels.

Okay...I lied about that last part...but you get the idea. What amazes me is the lack of consideration and manners that people have now a days. No one holds doors anymore. No one signals in traffic. No one cares if someone is behind them waiting to use the ATM....they are gonna keep trying to deposit that check that looks like they wiped their ass with...that the ATM keeps spitting back at them in a robot filled rage.

So let me be completely honest now. I don't enjoy most people. And the reason is because of some of the scenario's I've listed above. I was always taught to have manners. Take people into consideration. Move over while your thinking about what to order. How hard is it really? It's not.

The ironic thing about it all is that I live in Arizona...a place that when I first moved to back in 1989 was filled with nothing but nice people. And it was the perception by many people I encountered that New Yorkers were disgusting animals with no manners or regard for human life. When I moved back to NY in 1998, I found quite the opposite. Yes, people are in a rush and don't have time to be bothered with other people's bullshit. But you know what, most New Yorkers were taught how to hold doors for people, give up their seat on the train for older people, and when my mom fell in the subway there were good samaritans that helped her.

My point in all of this is everyone should take a good look at their actions throughout the day and think about how even the smallest action or lack of action can impact those around you.

Having said that, if one more person fails to use their turn signal...thereby indicating to me that they will be turning....while i'm waiting to make a right at the light.....and I don't go because i'm not thinking your going to turn...so you make me wait longer for traffic to pass......because you were too busy talking to friend about the finalists in "The Voice" to signal before you turn......I'm hunting you down...breaking off your turn signal and sticking it right in your goddamn....... 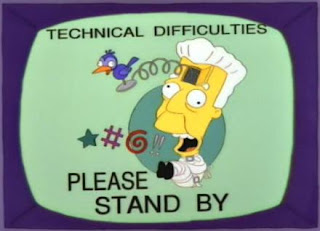 Posted by Gonzi Supreme at 7:49 PM