Everyone who is familiar with my columns know that I generally have a bone to pick with a given person, place, or thing. Today is no different. I've been meaning to write about my latest group of social misfits for sometime but just didn't feel like I was really 100% justified in hating them. Until I read this story today:

LOS ANGELES – A suspected drunken driver plowed into a group of bicyclists on a midnight ride Thursday in Los Angeles, injuring 11, one critically, police said.

The riders were in a group of about 100 cyclists that were struck by a white Honda Civic shortly before 2 a.m. about 8 miles south of downtown. The crash injured 11 riders, including one person who was hospitalized in critical condition but is expected to survive, said Officer Jacquelyn Abad.

Some bicyclists told KTTV Fox 11 that the woman driving the car appeared to be using a cell phone before the crash. They said she slowed down, then sped up and slammed into the group, sending some riders flying into the air and dragging at least one under her car.Television reports showed the car's smashed front end and shattered windshield. The 27-year-old woman was booked for investigation of drunken driving. Her name was not immediately released.

The bikers belonged to "Midnight Ridazz," a Koreatown bicycling group that gets together for weekly midnight rides. 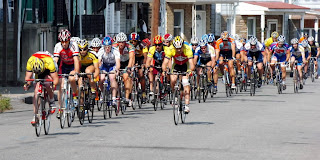 With their ridiculous spandex outfits and stupid helmets and their overpriced bicycles and their non toxic plastic water bottles made from recycled plastic and they’re constant desire to be treated as equals to cars. We have special lanes designated for these people and yet…many of them don’t want to use them. They want to ride out side of that lane, they want to use the same left turn lane as cars and yet they whine and bitch when a 20 something year old runs them over with their car. Is it legal for you to make a left turn that way?…sure….it’s also legal to bring your gun into a bar but that’s not a good idea either.

So back to this story, while the idea of someone being drunk AND texting while driving is comically horrifying, I have to say a couple of things about the story made me wonder:

The riders were in a group of about 100 cyclists that were struck by a white Honda Civic shortly before 2 a.m. about 8 miles south of downtown.

100 Cyclists? At 2 a.m.? How could this not end in tragedy? Look at how many cyclists get hit by cars when there is DAY LIGHT out…Maybe if there is a 100 of them clumped together only the weak and fickle will go down…looks like that was the case here.

The bikers belonged to "Midnight Ridazz," a Koreatown bicycling group that gets together for weekly midnight rides.

Ok. Anyone who spells riders as “Ridazz” deserves much more than being a victim of attempted vehicular manslaughter. Weekly Midnight Rides? You mean they’ve actually enjoyed so much it is now a tradition regardless of the fact that it annoys Denny’s overnight regulars.

Look at what you cyclists have turned me into. I’m a sympathizer for degenerate drunks that actually enjoy whatever food Denny’s puts in front of them.

By the way you cyclists that dropped whatever thousand on that road bike……here’s something that shits all over that: 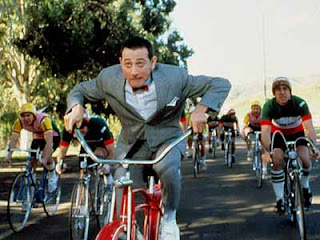 Posted by Gonzi Supreme at 1:13 PM