Abrams has made his best movie yet.

In short I loved it. This summer has really been a pleasant surprise with the big blockbuster films really delivering on the entertainment level. Its no secret I thoroughly enjoyed Thor and am impressed with how well Branagh adapted it. Vaughn made something really special with First Class in taking the X-men and placing them in history. Now with Super 8 Abrams has made the best movie of the summer so far. This film soars past the fanboy love of the first two summer films and becomes successful as a solid film, and further proof that a family film does not have to pander to children. Is this film going to win best picture?...probably not(for the record when Gladiator came out many reviews included the phrase "very good movie, but not best picture material") but this is a great family film that wears its history on its sleeve. 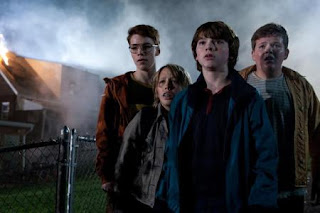 So let's talk about the film's influences for a bit. Abrams is obviously channeling Spielberg by way of The Thing here. Even down to Spielberg's obsession with the father son dynamic it is all up there on the screen. During the 70s and 80s Spielberg filled his films with ordinary people doing extraordinary things. His kids never spoke like they came out of a bad Disney tween sitcom, they spoke like real kids...peppered with slurs and full of energy and excitement not sarcasm and bad comedic timing. Abrams pulls it off here in spades. The cast of children he has put together fit in perfectly with the world of Spielberg, they get scared, they get awkward around girls, and they have genuine passion for adventure and the shortsighted recklessness of youth. When the shit starts to hit the fan Charles and Joe still band the team together to get some amazing shots with real PRODUCTION VALUE! When they know they're walking into legitimate danger the pyro kid still gets excited about using his sparklers.

I mentioned that Abrams even includes Spielberg's standard troubled father son dynamic. This kills me every time as anyone who knows the real Bence knows I have some decent daddy issues, but oh man I was unaware that walking into this was going to be a film about the loss of a boys mother and the way him and his father rebuild their relationship in the midst of this other tragedy that seems to be occurring. Way too close to home for me, but again pulled off impeccably. Abrams handles this relationship with such compassion, this isn't a father and son that hate each other, this is a father and son that don't know much about each other. Joe Lamb is the son of the deputy and we get the sense that most of his life his father was busy with work while his mom raised him. To see Joe finally stand up to his dad with tears in his eyes you know that he wishes everything he's saying wasn't true. He wishes his dad knew more about him, or encouraged him to pursue what he liked rather than trying to get Joe to be like his father and play baseball. Often times we see the father son dynamic taken to extremes on film, but to see such an honest portrayal is refreshing. 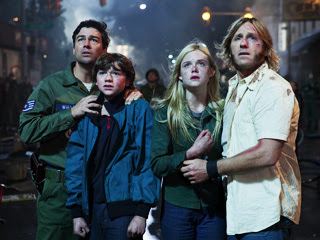 I mentioned The Thing at the top of this discussion, this alien is not like ET or Close Encounters. It just wants to go home, but after years of torture it's pissed and ready for revenge, but ultimately it just wants to leave. Its also far from cute and cuddly, and when you see the aliens lair, there is some damn dark imagery in that scene, but I'll let you experience that on your own. Abrams never gives you a good look at the monster until the end, and ultimately my one gripe is that the monster resembled the Cloverfield monster too much(another Abrams production....keep your eye out for a Slusho shout out) As my friend and mentor pointed out "at least this time they gave us a reason for the rampage."

Giachinno really is one of the most exciting composers working in film. His scores always have so much playful energy yet manage to strike some deep emotional beats without detracting from the film.(looking at you howard shore and hans zimmer) Here is no different, he captures youth in musical notes and weaves adventure through each moment in the film.

Yah yah the lens flares are still here, but unlike Star Trek they are far fewer and make sense within the world of the film. For instance at one point Joe and Alice are watching a film and the camera moves in front of the projector and boom lens flare. Maybe unnecessary but nowhere near as distracting as in Star Trek 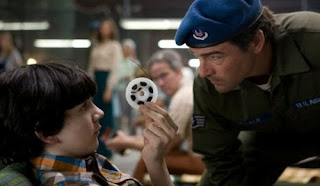 I want to talk about the film that the kids are making in this movie. I mentioned earlier that the kids continue to make their film even as the military presence grows and more and more strange occurrences happen. No matter what, through immaturity or sheer perseverance these kids will stop at nothing from pursuing their dreams, and they take it deathly serious. Stressing over on the moment rewrites, or the necessity to catch a shot with the perfect background action, or ensuring that their homemade lighting rigs are giving the proper shadows. Anyone who has tried to make a homemade movie will instantly feel nostalgic at watching these kids make a movie. Abrams shows us that movie making is fun, and at its best when it is full of passion and energy. To these kids this is the world, and if they don't finish the film, they won't win the festival, and if they won't win the festival they won't fulfilll their dreams...because that's how the world works as a kid. No matter what it is, filmmaking, dance, art, sports, everyone had passions as a kid, and every kid just wanted to be the best at whatever it was and that was their whole world. Beyond that we just want our parents to understand how much those passions mean to us, and when they don't see how much we love it, its frustrating. It causes Joe to finally tell his dad how he feels, it causes Charles to come clean about his feelings for Alice, it causes their leading man to reveal his own insecurities about his acting abilities. In case your passion does happen to be making movies, remember to include a love interest, Charles knows what he's talking about. 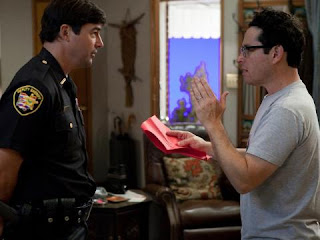 So yah I really loved this movie, and I could go on and on about how much awesome Abrams has placed into this film, or how he captures youth so much better than the dredge that is Judy Moody seems to be. This film touched me on such a personal level. From trying to move past his mother's death, to holding on to whatever he had left of her, to the frustrations the characters have with their fathers, to the youthful passion for movies and film making, to the sci fi skeleton that is woven through each scene, to the fact that these kids are in real danger. It all just resonates so strongly with me, and reminds me of what it was like to share Jurassic Park with my mom the first time, or what it was like when I saw the entire Star Wars trilogy with my dad. I will show my son films like this when the time comes and hopefully introduce him to the possibilities of quality family entertainment. I'm a big nerd and I love my comic adaptations, but this film shows us what is possible when you take an original idea and explore your own influences as to what made you what you are. Abrams gets better with every film so far, but we have yet to see a true masterpiece. As much as I love this film, I still think he can do better, there are bits of dialogue that seem clunky, again the design of the monster could have been more inspired, and a handful of other nitpicky things. No matter what though Abrams is quickly becoming the proper successor to Spielberg, and that in itself is exciting to see.

One last thought - my locket is a bracelet my little cousin gave my mom.
Posted by Bence at 10:58 PM