Super 8: JJ Abrams' Love Letter to the Producer of the Film, Steven Spielberg

Film Foray Cavalcade no. Once: Super 8 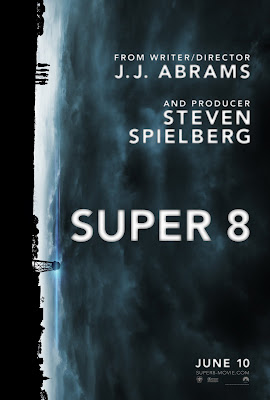 Let me dispel some rumors about this film, it is not a documentary about Super 8 film enthusiasts or the string of cheap motels along this nation's freeways. It is an alien film that acts as an homage to Spielberg films that we all enjoyed in our youth. The long and short of it is... An alien crashes on Earth, is tortured by the Air Force for sixteen years and is pretty pissed off at the human race. So, basically it reinforces my feelings on stories about aliens that visit Earth.

The story is about a group of friends and the girl from the wrong side of the tracks are shooting a movie about a detective investigates the emergence of zombies because of some shenanigans at a local chemical plant. While shooting a scene at a train station, they witness a train derail and something escape from it. If you have seen the opening scene from Lost then you can imagine how absurd that train derailment was (That is not a dig, it simply was ridiculous but in a fun way). Then the Air Force shows up to "clean up" the mess of metal and some rubik cubes type shapes (They looked a lot like Joel Silver's production logo) that litter the Ohio countryside.

Ever the villain in Spielberg's films and an obvious pick within Abrams' homage, they start pissing all over Jack Lamb's (the Deputy Sheriff of Lillian) jurisdiction and even start a natural disaster to evacuate the town so they can do battle with the alien that they have been torturing and probing for the past sixteen years. What is his crime you ask? He crashed landed and wanted to repair his ship so that he might get off this rock. At one point, he was probably a nice guy but he fell subject to the science fiction cliche mentioned earlier. In the end, he reverts after reading Joe Lamb's heart, rebuilds his ship and leaves in pure Spielbergian fashion. Cue the credits.

I liked this movie a lot, it did not break new ground as it played like a piece of Spielberg from the seventies. This is not a bad thing, it is basically why I had a love affair with Spielberg during film school. Let's face it Steve, you are not making films like you used to. The acting was solid all around (It featured the talents of one of my favorite actors, Kyle Chandler) with the exception of the character I dubbed Cartman (who verged on obnoxiousness every time he took screen). Unlike the films by Marvel, the special effects (Good on ya, ILM) will hold up for years to come whereas theirs do not by the end of the film. Also, the scene with Joe watching a reel of film with his mom (who died) throughout the years left the same feeling of mortality in my chest that I have as I watch the wee bairns Funkowitz grow up.

Imagine these flares throughout almost every scene
While I enjoyed Super 8 a lot, it had some issues. First and Foremost was the altogether excessive use of lens flares. It was so bad that I texted Hawk about it from the theater to say "we now have a sequel to lens flare the movie (Star Trek)." My chief criticism of that film was the same thing. Lens flares are nice but they are not needed in every scene, you take the audience out of the film when you use something that apparent to them. Another issue was the usage of annoying terms such as "production value" and "mint." In one scene, these words were used for every other word in a sentence. It become ludicrous to have to hear it over and over like nails on a chalkboard. It was funny the first time and obnoxious the 175th time. Honestly, these are small gripes and it is worth watching for the nostalgia factor alone.
Posted by Manfred "Manny" Funkowitz at 2:02 PM