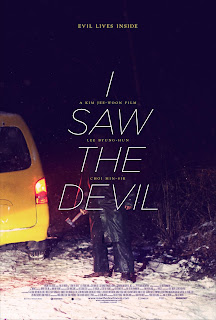 I Saw the Devil by Kim Jee Won was listed in my first ever weekly wish list and I finally got around to seeing it. Kim Jee Won has a great track record with his last film, The Good The Bad and The Weird, a Korean Western inspired(obviously) heavily from Leone, making it onto my top ten from 2010. His A Tale of Two Sisters has the honor of being one of the few films that the lovely Twincess(our resident Director of Social Media) actually requests to watch every Halloween when we do our daily horror movies for the last week. Those who know her know how much of a rarity that is.

So now we come to I Saw The Devil, his film about revenge and what it does to our soul. The story is about a secret agent whose wife is brutally Bmurdered by a psychotic serial killer. The agent played to badass perfection by Lee Lyung Hun, a mainstay in Kim Jee Won's work, take a few weeks off of work to search out his wife's kliler and enact his own revenge. Thus starts the most depraved and intense game of cat and mouse on screen I've seen in a long while. 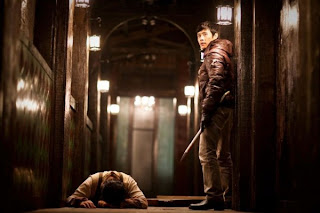 The title of the film definitely refers to the depths of evil that our "hero" succumbs to in his search for his killer. It plays with the idea of good and evil throughout the film giving us a world in which the truly innocent pay for the price of others actions. Lee Byung Hun goes after this man over and over and each time he catches up to him he inflicts a little more pain, and then a little more letting him go each time only to continue to chase him. He begins to forget that each time he lets this monster go more people get hurt as a result. 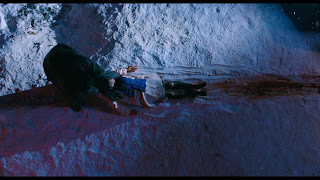 The cinematography is gorgeous and provides the perfect backdrop for this gritty and ultra violent tale of the man's journey to hell. He keeps the scenes in which Lee Byung hun has chased the killer to one of his hideouts in the dark, giving the perfect sense of dread as we enter the world of a madman. From the human meat locker that one of the killer's contemporaries has, to the killer's own garden in which he keeps a torture hole in the back everything in these locales is lit very precisely, highlighting each drop of blood each piece of rust on an old blade. He even takes a cue from Lubezki and does some amazing work weaving the camera in and out of car during a fight between our killer and two other psychos that happen to have their own slain body in the trunk. 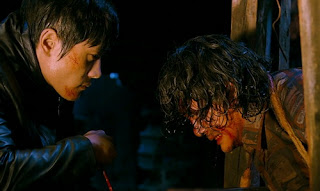 Before I finish I have to mention the performance of Old Boy himself...Min Sik Choi....holy shit he is the master of playing damaged psyches. Here rather than the vulnerable and confused Oh Dae S,u he is an embodiment of evil. Full of energy and fury that when unleashed is capable of taking you the darkest recesses of the soul. He drags down Lee Byung Hun with him forcing him to compromise all of his morals in order to catch him. You see the humanity peek out in small spurts, which only add to this amazing performance especially when he is finally confronted by his family, he almost reverts back to a normal human being begging them to stay away. He is the perfect foil to the revenge fueled secret agent.These two make a perfect pairing beginning as polar opposites only to end up discovering just how similar they are. The film rests on their shoulders and they rise to the occasion with great success.

So in case you couldn't tell this film is not for the faint of heart. It is violent, and brutal...there are scenes of gore but none of it is superfluous. Everything here makes sense within this world and the gore is never there just to shock you, here it is definitely mean to horrify you as to what these people do to each other. Good and evil are about as old of themes as one can play with and here Kim Jee Won takes us out of the black and white and shows us just how gray everything is. This film takes you to places that are uncomfortable, and he does it in style and with confidence. The film is so powerful and like much of his work he imbues this film with such raw emotion that it knocks you over with tragedy that befalls these characters. I can't recommend this film enough. One of the best of the year and further proof that Korean cinema is kicking all sorts of ass. 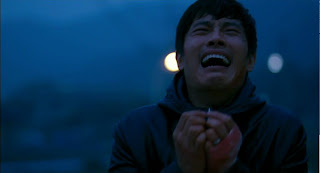 One last thought - seriously seeing the killers friends be these crazy cannibals that have gone mad from eating too much human meat....blows me away that he pulls this off without it feeling forced or venturing into the comical.