Weekly Wish List UPDATE... If you would like to sleep in a coffin, it would be all right 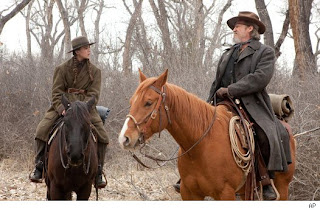 True Grit from American cinematic geniuses, the Coens, was Manfred's number one movie of 2010. If I had seen this movie earlier, I'm positive it would have made my top ten as well, where exactly I'm not sure. Not number one or two....those spots still belong to Black Swan and Inception respectively, but it deserves a spot somewhere for sure. This is a film that deserves to be seen over and over, not because of the complexity of the plot(for those who don't know little girl attempts to avenge her father's death, hires Jeff Bridges, Matt Damon comes along as a ranger who seems full of hot air) but because of the richness that the Coens have infused in every aspect of production. Let's go through a few of the highlights...we're going to finish with the performances.

First off the cinematography was amazing, but I would expect nothing less from Roger Deakins. The man should have won for Assassination of Jesse James Etc..., and his work here is great but I still vote for Libatique, and am still happy Pfister won. He shows us the west with as much beauty and majesty that classic masters such as Ford and Mann did. The opening scene showed off some great lighting skills, which he tones down as the film progresses and allows the camera to show off the beauty and majesty of the American landscape. Its a classic shot but I'm a sucker for the horizon at dusk as silhouettes ride off, and Deakins manages to pull it off without it feeling nostalgic or gimmicky. He fits it perfectly within the setting of the movie. The definition of classics done right. 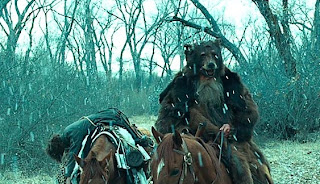 It's not that I don't pay attention to costume design, but it's not often that I see a movie and it jumps out at me as being insanely smart. Costume design often seems to me purely aesthetic..which is fine...more of a category worried about accuracy or creativity. The elizabethan costume dramas are gorgeous to look at, I love the detail Tarsem makes his designers include in their work, but here the costumes were such an integral part of the film that I was blown away. The costumes were not just period appropriate, but they were reflections of the character. Mattie's too big for her britches overcoat and large hat were representations of her acting outside her tender age of 14. La Bouef had the fabulousy fringe filled jacket which was perfect for his fancy character that never really showed off his actual skills until late in the film. His reveal of his badge was a simple perfect moment of acting for Damon. The hands down most amazing costume in the film though, belongs to bear man, the traveling medicine man who wears a bear.

Ok so what really sets this movie apart from everything else is the brilliant character work done by all. Not just the main cast, but EVERY SINGLE CHARACTER on that screen is a human being. There is no "character we see that gets us to point a", everyone has a soul and idiosyncracies that make it feel like a world that has been lived in. From the undertakers drawl, to bear man, to even Tom Chaney himself. Brolin is such a talent when with the right director, and as much as I liked him in Milk he is so understated and powerful with Coens that I wish he would only work with them for the rest of his career. By far one of the greatest interpretations of "villain" on screen, his first encounter with Mattie is the most unexpected scene of the year for me, next to Portman's amazing reverse leg work. Rooster spends a lot of the film talking about his past adventures and you get the sense that friend or foe, he talks about them with the same sense of familiarity, Brolin fully encapsulates this when he first speaks to Mattie and it spins your head to see her find the man she's been searching for with the intent on killing and have the scene play out the way it does. 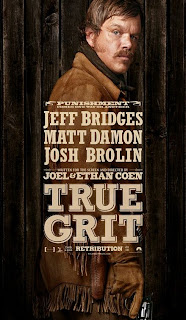 Damon does not get enough respect. Fact. Talented Mr Ripley, The Informant, The Good German, Bourne Series....c'mon. That's range right there. Just because he blew up right away after Good Will Hunting people forget how much he disappears into each role.

A lot has been said about Hailee Stanfield's turn as Mattie Ross, and yeah it's all true. A brilliant performance which I won't spend too much time on here. Watch the scene where she takes the horse through the water, you see the determination stubbornness in her face. No one is going to stand in her way and she will find the man that killed her father no matter what. She does that all without saying a word as she crosses the river.

Bridges outshines John Wayne. Not an easy feat....the guy is the Duke. But here the Dude creates a character that is timeless. Every drunken ramble, every angry scowl, every story of times past, every honest assessment of their state, it is all brilliantly brought to life by Bridges. You're definitely right when it comes to the performances Manny, Bridges was robbed of his Oscar.

This film is much more akin to The Searchers, and The Furies, not the stylized brilliance of Leone. Heavy praise? yah it's great but again not the best of the year for me although it is damn good. I still prefer Miller's Crossing(BRILLIANT in all caps), but a new entry from the Coens is always welcome. I would say I place this with No Country for Old Men, and no not because of the similar western setting, but I feel the quality is about the same.

One last thought - Seriously Burn After Reading is so underrated, and how come no one ever talks about A Serious Man.
Posted by Bence at 10:35 PM