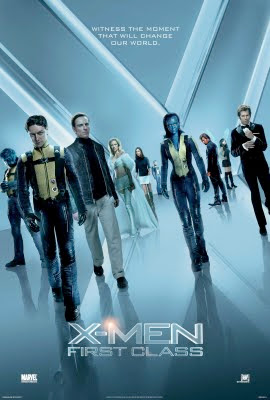 X-Men First Class
It has been roughly five years since an X-Men film has been in theaters and we all know what a disaster X3 was. Thanks Brett Ratner. Of course, it can not be a summer without three movies based on Marvel Comics properties. I will admit of the three (Thor, Captain America and X-Men First Class), X-Men was the one that I was most excited to see. While it was not a bad film nor the worst in the franchise (Rated in subjective order, X2-X-Men-X-Men First Class-X3), it was a decent enough film.

With Thor, I asserted that Marvel films tend to strive for mediocrity rather than break new ground. All of them are polished and devoid of the grit employed by Nolan in the Batman series. Yes, every comic films will be compared to Nolan's masterpieces. The cinematography in these films leaves much to be desire but that is a small gripe. Also, why is it, these films always take place in the middle of the day? This makes the "impending doom" of the situation seem less pressing. The other thing that really bothers me about Marvel's franchises is the lack of quality special affects (Think Spiderman's aerobatics or in this case, Emma Frost's diamond form). 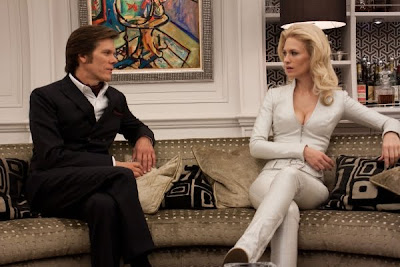 I did enjoy several things about this film, in particular was Michael Fassbender's performance as Magneto. When I think of Magneto in the comics, this is how he conducted himself on-screen. It was a nice to see the character as a young man rather than a geriatric with a walker. I also was a huge fan of Kevin Bacon's hair in the film. It was a magnificent mane that continued to grow from scene to scene. James McAvoy did a decent job but overall he came across as arrogant for a man who utilizes the same technologies for the next forty years. I also thought the film did a really good (great actually) job of establishing the dynamic between Professor X and Magneto as enemies. They do not hate but respect each other, theirs is a difference of opinion. Of course, the best part of the film was Hugh Jackman's cameo where he tells Magneto and Professor X off (That is how you do a cameo! Sorry Hawkeye).

Of course, the film was far from perfect and suffered from an excessive use of "lame" references to later developments. Notable examples include Charles about being bald or Moira MacTaggert (who oddly enough is not Scottish) creating the name of the team. In retrospect, most of the film's issues merely stemmed from the screenplay. They even rehashed one of the worst aspects of the first film... Namely, the development of codenames, "I dub you Magneto."

In the end, I thought it was a decent film, it does not break new ground but it was not a horrible blockbuster sequel like Iron Man 2. Personally, I enjoyed it but I am getting exhausted by the fact that Marvel films refuse to break the mold and take a chance. I hoped that Matthew Vaughan would bring something new to the table as director but it is clear that the studio still wields a mighty fist. Then again, I would like Layer Cake Vaughan and not Kick-Ass Vaughan. Sorry Bence, I cannot get over that jetpack, I digress.

P.S. Why does January Jones always just play Betty Draper... Is the advice from directors to her, "Just stand there and look pretty?"
Posted by Manfred "Manny" Funkowitz at 10:51 AM