You know, I Love it When News Becomes News Four to Five Years After it Breaks Initially 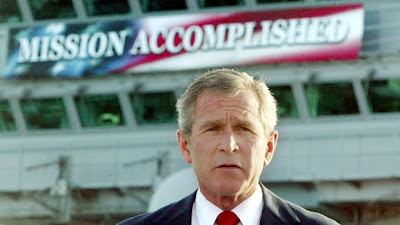 On March 19, 2003, The United States invades Iraq to remove Saddam Hussein and forty-three days after that, George W. Bush is videotaped doing the Charleston on the deck of the USS Abraham Lincoln... End of major combat operations and the war in Iraq was "officially over." With the dreaded regime of Saddam Hussein vanquished and American aided by the members of the coalition of the "willing" who sent actual military personnel triumphant, a new phase began in Iraq... The reconstruction.

In true American fashion, the first people not to get called for duty in post-war Iraq were the practitioners of accountancy or number crunchers. Without the presence of those notorious tightwads (and all-around buzzkills) there was no need keep track of the money flown into Iraq on cargo planes to pay for the reconstruction of a war torn nation. Faster than W. could finish the charleston, an insurgency erupted and a civil war ostensibly breaks out and wouldn't you know it... Six point seven billion (yes, I said BILLION) goes missing. That was roughly eight years ago. 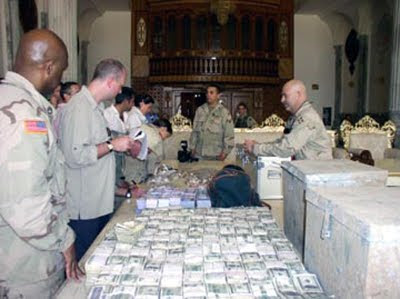 I do not know what is worse, the fact that the money literally walked out the front door in a sack (sadly without the $) or how these constitutes news five years after it broke. I am glad that Congress is running its third inquiry into the matter. I will break it down for you (in all caps, just in case a Congressman is reading this post and has difficulty understanding). PALLETS OF CASH WAS SENT TO IRAQ, STUFFED INTO BAGS (like the blue one in the photo) WITHOUT OVERSIGHT OR PROTOCOLS AND GIVEN TO LESS THAN TRUSTWORTHY PEOPLE WHO STOLE IT. Case closed. If you still need help, Congressman (Insert name), I am compiling the spark notes about it for you.

Thankfully, the lost 6.7 billion dollars was not U.S. taxpayers funds but money from the sale of Iraqi oil held because of sanctions. Whew! Let me expel a huge sigh of relief. Who is up for a high five? What? The Iraqi's want to sue and get the money back? Cough, Cough... Raspberries. Hey, we cannot be responsible for a few bad apples (wow, you can use that excuse for everything, thanks Rummy!) and the lack of the necessary accounting measures needed to maintain detailed records about dispersing cash to individuals. We flew the money in from America no less (which by the way, jet fuel is expensive) and had some people stuff it (many received paper cuts) into bags (they were not cheap) after that the expectation was that roads would be paved and buildings bombed rebuilt. Whatever happened to the money after it left the building is on you. That is the cost of war my friends and everything was solid on our end.

Seriously though, this really is old news and the fact that Congress keeps wasting time (and taxpayer money this time) with inquiry after inquiry on the matter is ridiculous. It is time to face the music and admit that the plan for reconstruction was at best... Half-assed. For the record, throwing wads of cash at a problem in the midst of sectarian violence is not a plan. Honestly, this lost money is not string theory, it is quite apparent what happened. Rather than looking foolish continuously, just fess up and admit that a lack of planning resulted in the loss of billions of dollars. Wait... That would give the Iraqis a firm foundation for their eventual lawsuit, you say... Plead the fifth!
Posted by Manfred "Manny" Funkowitz at 8:59 PM