Zack Snyder Keeps Writing Checks with his Mouth that his Arse Can't Cash. 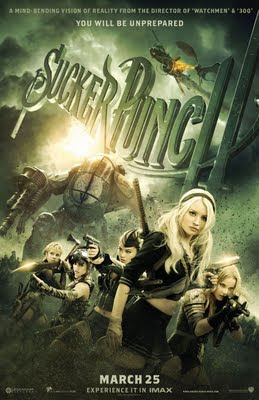 Zack Snyder is one thing and no, it is not a talented filmmaker. He is one of the most overrated "talents" (I am using this term very loosely) in American cinema today. After the shirtless escapades of the Spartans, he somehow achieved "visionary" status. Bold claims for a man with only one good film under his belt (Dawn of the Dead) and another that was pretty good/ a step up from 300 (Watchmen). Snyder is as much an auteur as I am a ladies man. Sucker Punch illustrates this point which is a disturbing revelation considering he was involved at various facets of the production process as director, co-screenwriter and producer.

Sucker Punch is the tale of Babydoll (Emily Browning) told through the lens of a misogynist. She is thrown into a facility for the mentally insane to keep from revealing the true nature of her sister's death by her abusive stepfather. This was a move to make it impossible for her to reclaim her mum's fortune, natch. Way to parent. To make matters even more convoluted, the director of this institution for cognitive rehabilitation has been bribed to have Babydoll lobotomized.

Once inside, Babydoll retreats into a "fantasy" world within her mind where the insane asylum is now a brothel. It was at this point that I decided maybe Babydoll is --at the very least-- mentally unstable since she is obviously detached from reality thus her presence in the asylum is warranted. Movie over. Time to shuffle out... Wait, there is still one hundred and eight minutes left... Damn. Of course, now Babydoll decides to predicate her escape from the house of the mentally unstable in her mind. You can see where this is going, in one corner it is the definition of "madness" and the other is the "style over substance" train.

To escape and obtain sweet sweet freedom, she will need to locate five items which include: a map, a knife, fire, a key and "a fifth item that will we require great sacrifice." It was this conversation between Babydoll and figment of her imagination (Scott Glenn) that would lead someone deaf, dumb and blind to realize that she is going to get a hole poked into her brain. That is not a "spoiler" when the script is this poorly conceived and obvious.

Once the plan is devised, Babydoll bands together with four other ladies with equally patronizing monikers (Amber, Sweet Pea, Rocket and Blondie) to escape before Babydoll's virginity is sold to the "High Roller" (Seriously, Jon Hamm... Why did you cameo in this... For the love of Pete, you are better than this). If you do not think the plot demeans women, you should see the costumes that Babydoll and her comrades prance about screen in. 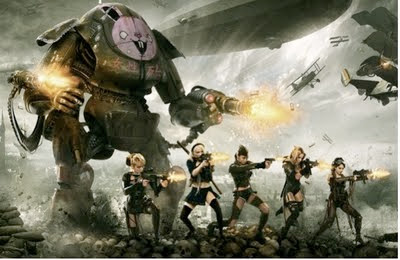 Wow, highly objectified young looking women acting out a script that would make a PS2 game blush. Also, the special effects in this film look worse than the graphics for that gaming system. Where is the sign-up sheet for this train wreck? I cannot for the life of me think of anything redeeming about this film. Do not get me wrong, I enjoy scantily clad women as the next bloke but I also enjoy plot that does not demean the characters or the audience for that matter. For those keeping score, three of women in the picture above die in Babydoll's mind (and real life as well... Beats me how that works) and another gets a hole poked in the brain by Jon Hamm. I will let you sort that out for yourselves.

It is difficult for a film to be good let alone great when the plot is driven by how much skin young girls can show, stylized violence can appear on screen and special effects that make Episode II's look amazing (What happened to using real sets?). This movie was made for one demographic in particular... 13-25 year old boy who love watching a movie that plays out like a bad video game. Since most of the world does not fall with that age/gender range (myself included), you will probably not like this film. Honestly, after the usage of the worst Pixies cover in the world, I knew nothing good would from watching it and nothing did.
Posted by Manfred "Manny" Funkowitz at 9:02 AM