The Epilogue goes Slightly "Potter" but It is Another Solid Read: Mockingjay 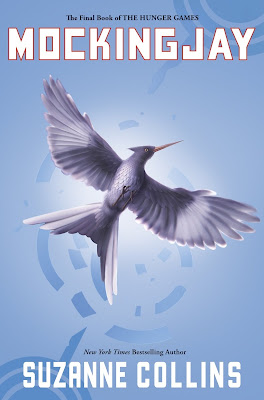 The Quarter Quell ended in a way that the Capital had not expected... It provided the spark to start the revolution led by District 13 (which was previously said to be destroyed) and the remaining 11 districts are poised to follow suit. Unlike 13 which went underground (Literally, they live in a series of bunkers and exemplify a "waste not, want not mentality)... District 12 has been burned to the ground, a small contingent of survivors made it to 13 and Katniss is a girl without a home.

The bulk of the novel deals with Katniss' grappling with being the symbol of a burgeoning revolt. This leads her into combat and places her at the machinations of politicians and propaganda ministers. She is also on a vendetta to kill the President of Panem for his roles perpetuating the Hunger Games (Yeah, talk about reaching for the stars). Throughout the course of this sectarian conflict, she learns many things about the people close her and people are not what they seem.

I thought that this book was a decent conclusion to the series, I was not let down by what transpired in the novel (It was a fear of mine) and honestly, every book was an improvement upon the last in terms of prose. I was also glad that much of the romance was toned down, yet, I found myself taking "sides" this time around. Thankfully, Suzanne Collins did not simply just kill one of them off to make the choice easy (She just made one of them into a horrible human being).

I wish I could find something to complain about with this series, certainly, these books are not Shakespeare or "high" fiction... They are just a great series of books with the noble purpose of getting children to read. Who can complain with that? Furthermore, if adults (yes, yes... Old man Funkowitz is one of these) can enjoy them (and we do), who can belittle that. After all, this is not Twilight (I had to fit in the obligatory burn at this series...) and Stephanie Meyer could take some notes on how to write a series of books that would be good.
Posted by Manfred "Manny" Funkowitz at 9:43 AM