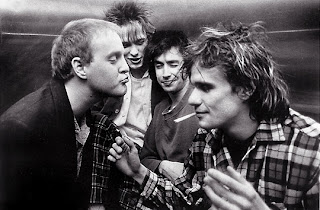 "God, what a mess, on the ladder of success,
Where you take one step and miss the whole first rung,
Dreams unfulfilled, graduate unskilled,
It beats pickin' cotton and waitin' to be forgotten,
We are the sons of no one - bastards of young"
~Bastards of Young~

Yes, here comes a regular, friends. America's birthday. Yeah, congratulations great country of mine. You're still better than anywhere else to live, and there's lots I'm proud of you for ol' lass, but you're simultaneously chasing the ashes of befallen Rome, Babylon and Egypt. Here in the music section of the 'Maus, July 4th means something else to me besides the greatness of Thomas Jefferson (Manny's a Gotham City deadshot with that one) and apple pie: The last time The Replacements performed live, way back in 1991. Yes, 20 years ago today, the band that drank too much to remember what Sgt. Pepper taught the band to play...here comes a regular, and there goes a career indeed...

Kneeling alongside old Sad Eyes,
He says "Opportunity knocks once then the door slams shut,"
All I know is I'm sick of everything that my money can buy,
The fool who wastes his life, God rest his guts"
~Here Comes a Regular~ 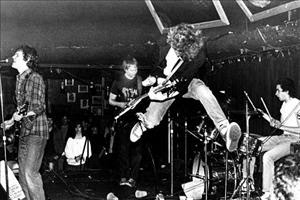 People are too quick and too often judge a band as a band with "indie cred" or "rebels" or "the best band you've never heard of." The Minneapolis born underground legends The Replacements (they must put something in the water in ol' Minneapolis when it comes to songwriters...) truly were the BEST band you never heard of. It seems the few people who found something in them decided to start bands of their own. With Bob Stinson's crunchy guitar, his brothers bass that rivaled him in size (Tommy being all of 12 when the band started), Westerberg's voice, ragged from too much drinking, singing about everything from youth angst to youth idols (you know, children by the million and ol' Alex Chilton) to drugs and drinking to suicide and sex, to the plaid suits and then their blatant disregard for anything "industry" or sell-out, you see their influence all over - Wallflowers, Green Day, Goo Goo Dolls, Nirvana, Gin Blossoms, Soul Asylum - so many bands that defined the 90's sound were really just emulating what they were doing the decade prior.

"Paul Westerberg is the F**cking best songwriter there ever was..."
~Doug Hopkins, writer - "Hey, Jealousy," "Found out about You"~

"The Replacements were superheroes: They rescued a whole planet from 80's music."
~Nick Hornby, author of "High Fidelity"~

"People take advantage of him (Westerberg), I'm sure it must be very painful for him to watch these groups that are far inferior to him doing this watered down, B-version of what he started."
~Jakob Dylan, lead-singer/songwriter for the Wallflowers~

(On seeing them live) "It changed my whole life. If it wasn't for that, I might've spent my whole life playing in speed metal bands."
~Billy Jo Armstrong, Green Day~

"Watching the Replacements not give a sh*t on the stage of Saturday Night Live was when we realized how we could have fun playing live."
~Jesse Valenzuela, Gin Blossoms 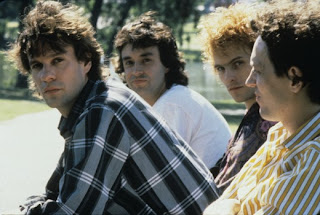 I once said Paul Westerberg makes Kurt Cobain sound like Billy Joel, I didn't mean it as a rip on Kurt Cobain, anyone who reads my articles knows how much I love Nirvana and Cobain, I just mean Westerberg was (and IS) that good. The biggest thing that held back the Replacements was the Replacements. In an interview around 1986 for MTV Westerberg came right and said "there's sometimes we're not feeling it, and we won't lie to you about that, we don't always care." Which is why if you went and saw them 10 times, there's a good chance that 3 of those times were far and wide the greatest rock shows you've ever seen. However, 7 of those times the Replacements were flat out drunk, Tommy Stinson and that bass as big as he was, his brother possibly wearing a dress, the band, if they made it past fighting on-stage to doing actual songs, deciding instead of playing their own tunes to do seven consecutive versions of "Hey Dolly." When they finally made it to a big label off the respect their indie 1984 album 'Let it Be,' quite possibly the best LP that decade has to offer, they got the chance to make their first music video, the more than excellent "Bastards of Young." What did they do? They released a video of a speaker playing the song. That's it. Sure, it slowly zooms out at one point and a guy comes out of nowhere at the end to kick it. But that's it. In the late 80's they got a chance to open up for Tom Petty & the Heartbreakers, what did they do? They stole his wives dresses and wore them on-stage. Oh, that didn't stop Petty from stealing a line ("he's a rebel without a clue") for an album a couple years later. They got a chance to play for a major awards show that same year as the Petty tour and Westerberg opened up with simply saying "What the hell are we doing here?" This, after the PA announcer literally apologized in advance as she announced them. 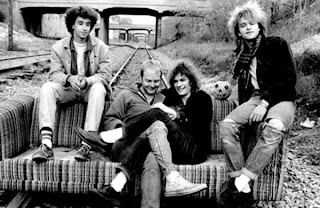 By the time of 1990's 'All Shook Down,' the angst thing was pretty done though. Bob Stinson was out of the band and on his way to an early death in 1995, Westerberg's voice was almost destroyed by the band's constant drinking - if I read you what they had on their dressing room lists for each venue, you'd think it was what they drank in a week, not started at noon and finished by the next morning - and he didn't want to be considered a joke anymore. He's not, in fact he's the closest thing to his generations Bob Dylan, songwriting speaking, as you'll get. Something he started by the end of the 'Mats with tunes like "Achin' to Be," "Can't Hardly Wait," "Skyway" and "Swingin' Party," and continued on stronger than ever. Don't believe me? Listen to "It's a Wonderful Lie," and try to get Conor Oberst, Lady Gaga, Jack White or any other supposed modern songwriter to come close to that emotion in lyricism. So, while we have a few great albums (pick up 'Let it Be,' 'Tim,' 'Pleased to meet Me' if you're a rock fan, 'Stink' - as in the Replacements Stink - and 'Sorry ma, Forgot to take out the Trash' if you're a punk fan) and now stuck with Tommy Stinson doing terrible versions of "Knockin' on Heaven's Door" with Axl Rose, at least we still have Westerberg's solo work, great in it's own right and underrated due to the legend he built with the 'Mats, the little band that could, but still can't get the respect they deserve...

"And the sign says, "Thank you very much for not smoking,"
My own sign says, "I'm sorry, I'm smokin,"
Don't treat me special, don't kiss my a**,
Treat me like the way they treat 'em up in first class"
~Waitress in the Sky~

When that band broke up, the last show being on July 4th 1991, rock died a little. Maybe more than a little. It seems Bill Pullman could fight aliens, but he still can't get a Replacements reunion tour. We can only hope, it may be Independence Day, but we're still looking for a Declaration of Replacements...

"How young are you?


How old am I?
Let's count the rings around my eyes
How smart are you?
How dumb am I?
Don't count any of my advice"
~ I Will Dare~
Posted by Hudson Hawk at 12:22 AM