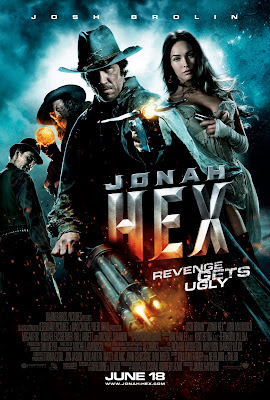 Lord knows I wanted to hate Jonah Hex. Perhaps, it is my soft spot for westerns (Just wait for my thirty-six part series retrospective on Deadwood) or my fond memories of watching the episode of Batman: The Animated Series guest-starring the character of Jonah Hex. Regardless, deep down there was a great idea within that movie and lord bless them, the filmmakers (namely, Neveldine/ Taylor who wrote the screenplay) went out of their way to give us one of the worst films of 2010.

That is not to say that it was not enjoyable for all those involved (Coupe Funkowitz and good ol' Hawk) cracking wise at some of the dialogue or wondering what happened to Hex's face in our best Megan Fox impression. You could not help but go back to the fact that this could have been a good film had Neveldine/ Taylor (the gents behind the abhorrent Crank film series) not been involved. The screenplay was such a mess that the editor tried with all of his might to make a coherent story out of nothing to speak of. The story of Jonah Hex is one of murdered families, talking to dead people, burnt faces and revenge told in the most haphazard of manners.

Honestly, you have to hand it to the cast, mainly, Josh Brolin who pulls a Hugh Jackman and acts his arse off considering the lack of script. Michael Fassbender and Lance Reddick (two of my favorite acting gents) also leave their mark on a film where the screenwriters turned in pages as they were acting it out. I also know who Peter Sarsgaard will be in the future... He will be much like the declining John Malkovich in terms of relative talent.

So, we have Brolin, Fassbender and Reddick doing their best... At least, it is great to see that people can be consummate professionals considering they were in a dire situation. Jonah Hex was like a bad version of Pirates of the Caribbean, had Warner Brothers hired a serviceable director who had made his mark in live action films and screenwriters who know the King's English than the result might have been different. I am going to give Warner Brothers and Six Flag's a million dollar idea... Make an animatronic Jonah Hex ride at your theme park. I know of two people who will ride that... Seriously, the world needs more comic themed western rides.

Anyway, I need to point one more gripe and ironically enough, it is not Megan Fox's acting (which was still bad). Whatever studio executive, who thought that a movie with a horrible animated sequence (which looked a horrible flash animation) to replace twenty minutes of actual plot would look awesome should lose his job. It is hard to make a movie with less than talented people in major roles in the creative process (the editor gets a nod for trying), a paltry forty-five million dollar budget, website flash animation and eighty-two minutes to tell a story. It is a shame too, since there was a story worth telling somewhere in that screenplay... Instead, the audience was left with DC's version of X-Men Origins: Wolverine.
Posted by Manfred "Manny" Funkowitz at 4:01 PM