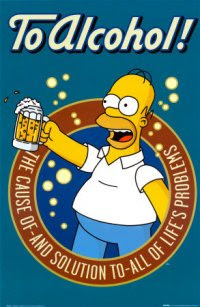 "Why Don't you quit drinking, Dad? Cos, I no quitter" - John Leguizamo


I gotta say, I have respect for someone who is willing to do something without half assing it. No Half Steppin. Just devote everything you got into something. Someone who devotes them self to something many times throughout their life thereby becomes more wise and possibly even an expert in that respective field. So, when you have someone who thinks they can just come into the Dojo and break boards over their head without putting in the wax on/wax off hours, they inevitably look like scumbag.

Normal People - Thankfully, this is the majority of the boozing population. They are capable of enjoying their alcohol without negatively impacting anyone else’s life. These are your wine drinkers and beer drinkers that may every once in a while enjoy hard booze but can still hold it together.

Alcoholics - Now here are your pros. These people live, breathe, and thrive on alcohol. They never get sick from drinking. They know what combination of what boozes will have what effect. They know their limit. They never get DUIs. They might drive after drinking but they never get caught because they know what they are doing. Unfortunately, because alcohol amplifies various characteristics, some of these people can be abusive towards others. I wouldn’t blame the alcohol, I would just blame it on the fact that deep down they are just dicks. Even in the negative cases, you know what can be expected of Alcoholics.

Drunks - Now this group...these are the ones who make the news. These are your wild cards and you never know how the night is gonna end with these people. You could end up in jail with them or you could end up having to listen to them puke and cry at the same time while hovering a McDonald’s Bathroom Toilet Bowl. These people don’t know their limits and generally drink to deal with issues that they can’t deal with like normal people. They destroy families, embarrass friends, go to rehab multiple times, and have at least one “Remember that time I almost died” story. A lot of them have something to prove so they over exert themselves, ruin someone or something, and there by half ass their way to a life of being a drunk wishing they were an alcoholic.

I think it’s clear to see what group I have an issue with. Drunks fuck it up for everyone. While Drunks are having the time of their life that they will forget the next morning they blow everyone else’s buzz. Drunks feel that drinking makes everything better; which really just defines how simple minded a Drunk and their entire existence is. They’ll never be as dope as an alcoholic and clearly have an issue with being a normal person contributing positively to society. They need hours and hours of therapy....and or Pot.

The next drunk that interrupts one of my rare social appearances is getting verbally abused into a fight and waking up 30 minutes later in a puddle of their own excrement and self pity.
Posted by Gonzi Supreme at 6:13 PM