The Ironic Irony of the Ironish 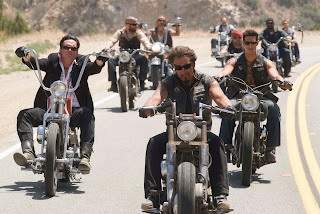 Irony. Karma. A dose of your own medicine. A bunch of different ways to describe the same phenomenon. Hawk forwarded me the following story and it is one of those stories that is almost TOO ironic. Like, the kinda comedy bit that has been done a million times by sitcoms to some unlucky schmuck. Like something out of final destination.

“Maybe you should be careful...the floor is slippery”
“Shut your fat mouth...I’ll do what I want”
*Dude takes a step forward slips and is impaled by a steel spear*

But right before the dude is impaled you know it’s coming. He’s clearly a big mouthed douche and the audience will feel vindicated if he dies by ignoring smart advice by a token big boobed blonde.

So as I was saying...this story just came out..

ONONDAGA, N.Y. (AP) — Police say a motorcyclist participating in a protest ride against helmet laws in upstate New York died after he flipped over the bike's handlebars and hit his head on the pavement. The accident happened Saturday afternoon in the town of Onondaga, in central New York near Syracuse. State troopers tell The Post-Standard of Syracuse that 55-year-old Philip A. Contos of Parish, N.Y., was driving a 1983 Harley Davidson with a group of bikers who were protesting helmet laws by not wearing helmets. Troopers say Contos hit his brakes and the motorcycle fishtailed. The bike spun out of control, and Contos toppled over the handlebars. He was pronounced dead at a hospital. Troopers say Contos would have likely survived if he had been wearing a helmet.


If ever there was a scenario to define Irony, this would undoubtedly be it. Personally, I think it takes some balls to get on a motorcycle and ride near a bunch of motorized torpedoes that can end your existence in the blink of an eye. To not wear a helmet is just absurd. There are plenty of styles, sizes, colors, etc that can provide protection for that hard head of yours.

So why do so many riders choose not to wear one? I’ve never ridden a motorcycle so I can’t really speculate. It is an unfortunate situation and hopefully some of the other riders that saw this will reconsider their position

That said...you know a couple of these guys before the ride had a conversation that went something like this:

Biker 1: Man...can you believe they want to make us wear helmets?!
Biker 2: I know! Goddamn government wants to take away all of our rights.
Biker 1: Tell me about it. These weekend “hobby” riders have no idea want it’s like to ride with a helmet all the time.
Biker 2: Of course they don’t! That’s why we need this protest. To make our voices heard! No helmets!
Biker 1: I’m with you brother!
Biker 2: This is gonna be a historic day for all of our brothers!
Biker 1: Hell yeah!
Biker 2: Man I was just thinking...
Biker 1: About what?
Biker 2: We are doing a ride protest without helmets to show that we don’t wanna ride with helmets.
Biker 1: Right...
Biker 2: Wouldn’t it be crazy if one of us dropped our bike...and split our melon all over the concrete
Biker 1: That would be some shit alright.
Biker 2: But the irony behind that would be so ridiculous that no one would ever believe that story.
Biker 1: Seriously, like it’s an episode of “Curb Your Enthusiasm”.
Biker 2: You know, usually i’m not too fond of jew comedy but that show is amazing.
Biker 1: Your goddamn right it is!

(After the accident the gang is at the hospital)

Biker 1: So you think this would be a good pitch for Larry David?
Biker 2: I’ll get HBO on the phone.
Posted by Gonzi Supreme at 7:57 PM