The best conversation starter in my mind, and one that yields so many different responses. In my other life I ask this question to anyone new I meet. As fond of the question as I am I feel like there are some inherent problems with it. Either in the responses or the question itself.

So here are some thoughts.

1. For me there is one correct answer to this....."I don't know if I could pinpoint just one" Movies are so diverse, that it is near impossible to nail down your tastes to a single shining beacon of perfection. Truth be told this is typically the answer I get when I ask the question. To which I always respond...."Ok give me your top five".

2. There is an exception to this. If someone is able to name their favorite movie immediately, I am always curious. That kind of whip snap reflex response must mean there is some definite reason behind said movie being your favorite. Again this usually will yield some decent conversation, even if I don't agree with their choice. Which leads me to my next thought.

3. People love ALL kinds of movies. The more I ask the more I feel like my tastes are not those shared by the majority of cinema goers out there. And that's totally fine, everyone should be able to enjoy film whether you love rom coms are sci fi or some brilliant new wave Truffaut perfection. So what do I constantly get...well.... Goodfellas and Avatar seem to be pretty consistent lately.

4. The question refers to ALL TIME.....is there a time restraint as to when a movie should be "allowed" to be your favorite. Let me clarify. I mentioned above that Avatar is pretty consistent on people's lists lately when I ask them the question. I think overall when I ask people for a top five, the films are usually films within the past few years if not form the past year. For me it would be hard for a new film to become so ingrained in my psyche and touch me on such a personal level that after such a short time it would make it into my top five. But is that me just being pretentious? Obviously there is a subjective nature to one's likes and dislikes.

And that really is my biggest question. How long must a movie be around before it can enter a top five. On my list is Requiem for a Dream which was out in 2000. Is that too soon?....How about The Dark Knight? ..ultimately I suppose it doesn't matter, but I fail to believe that a film just released should have a little more views before it enters a "favorite of all time list."

1. These films shape the way I view cinema. These are the filter through which I see everything else, they are definitions personified. For instance as much as I love Godard(favorite director of all time) 400 Blows is the definitive New Wave film for me. These are films that changed the way I feel about film. Avatar...is not one of these films. Dances with Wolves and Camerons Aliens are each better films on their own.

2. I have seen these films numerous times each and enjoy them each time. One of the problems I have with saying a new movie is your favorite is that they haven't had the chance to stand the test of time. There is no way you can say a film is your favorite after only seeing it once or twice. There is no set number obviously, but I'd say I've seen each of the top 5 at least ten times. Films need to have sustainablitity. The first time you watch something is exciting, but if the film is really that good. It will be just as exciting the next 20 times you watch it. My ever graceful employer is big on this. A few years back he praised Iron Man and was middle of the road on Star Trek. When it came time for end of the year lists to come out Star Trek had made it onto his top ten and Iron Man had begun slipping because "it doesn't hold up."

3. When I say a film is my favorite it has a strong personal connection. Now this doesn't necessarily mean emotional, just a strong personal reaction. So whether its playing to my childhood love of dinosaurs or being the film that inspired me to begin exploring film each film in my top five has some deeper meaning beyond "I really like it."

Each of the films in my top five epitomize these three features. Again this is all subjective, but cinema is an important part of my life and as such I would never throw around a word like "favorite" without some thought. So without further ado in no particular order here are my top five films of all time with a brief description of why. 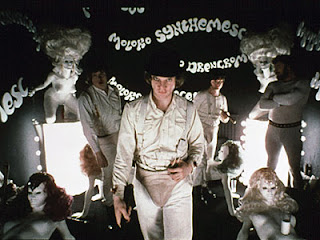 A Clockwork Orange - Stanley Kubrick
I saw this in high school and it was the first movie that really showed me how far you could push cinema. Before this I had no idea what movies could be other than Spielberg and Lucas. This opened my eyes to what has been a lifelong passion and still every time I watch it I am blown away by its power. 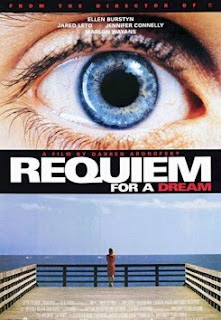 Requiem for a Dream - Darren Aronofsky
Favorite working director. The guy makes films that speak to my soul on so many levels. No I am not nor have ever been a drug addict, or a neural surgeon, or a cosmonaut, or a wrestler or a mathematician or a psychotic ballerina. But I do not what it means to let passion take over your life, to be willing to go to the ends of the earth for someone you love, what it means to want to mean something to someone or how hard you must push yourself when trying to attain perfection. His films are about passion and the depths we go to to protect these passions. He shows us everything the good and the bad in all of his films and the result are stories that are much more humanistic than people give him credit for. This film turns off a lot of people because of its graphic nature and subject matter, but damnit he gets a lifetime performance out of Ellen Burstyn, Marlon Wayans shows he's got talent, and Aronofsky proves that quick cutting and montage editing did not get killed by MTV. He uses film as a language to tell his stories, this was the last of his more experimental forays with cinema but you can see how he builds with each following film. I saw this in college and ever the lover of style, I was in awe of his ability to actually use style to support the substance. 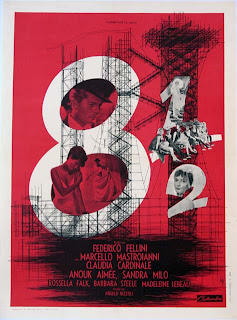 8 1/2 - Federico Fellini
I went through a hardcore Fellini phase in college after seeing this film. The guy is necessary viewing for anyone who says they love movies, and no movie about movies is better than this one. Fellini at his most absurd and self reflexive creates this masterpiece of cinema representing life representing cinema. I wrote an article about Adaptation in May and how the movie became the movie that he was writing in the movie....Fellini outdoes Kaufman at every turn. Plus no way can Cage ever come close to being as badass as Mastroianni. The beginning of my love for the absurd. Not the weird(though I'm fond of the weird) but the absurd. 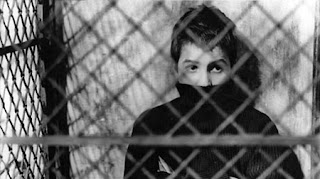 The 400 Blows - Francois Truffaut
The definitive French New Wave film. By far my favorite period for cinema, and nothing captures the emotion and purpose of this movement like this film. Not enough? Well it is one of the most honest movies about youth in cinema that you are likely to see. Antoine Doinel will forever be a cinematic legend. My favorite scene? Even when he tries to honor past greats like Balzac, he ends up burning them down. Literally. Again, required viewing for anyone who says they are a serious cinema lover. 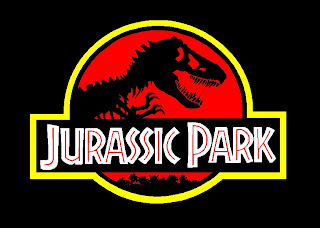 Jurassic Park - Steven Spielberg
Definitely the one I get the most questions about. Also sadly often times the only one people know. Truth be told I think his best film is Close Encounters of the Third Kind, but this is in my top five of all time because for me, Jurassic Park is what a blockbuster should be. Despite what Manny thinks, I enjoyed Transformers, but I wouldn't call my review "positive." This on the other hand is a true blockbuster. Entertaining, with a great story and great characters and heart. Add to that some great work Williams and you have a modern Spielberg classic. I was a little young to see his earlier classics in the theater, but I was the perfect age for this. The first and only movie that I saw FIVE times in the theater. It manages to be in that great category of films that are timeless. Aside from the clothes, the graphics still look great(gotta love Stan Winston) and seeing the T-rex fight the velociraptors at the end is still one of the greatest scenes of cinema. I love this movie completely, it captures my childhood love of dinosaurs and adventure and gives us an amazing story of playing god gone awry. I showed this to my son when he was two days old. I love all the films on this list, but this film I can share with my family always.

These are my five favorite films of all time. I could never do them justice in just a few words. Maybe I'll come back and do more in depth about each one, but for now that's my list. I want to leave you with these questions and urge you to reply down in the comments section. Is it wrong to put a new film in your top five? Should there be some sort of time restraint so that a movie can stand the test of time?...and of course my favorite question....what are your top five films? I won't judge. I promise. That's Manny's job. 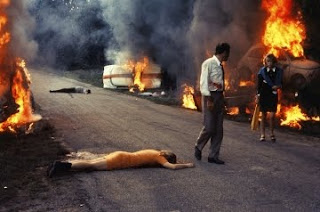 One last thought - rounding out the top ten here are my next top five again in no particular order. This is a rough list so this might change.
The Dark Knight - Christopher Nolan
Blade Runner - Ridley Scott
Duck Soup - Leo McCarey(let's be honest though it's a Marx Bros film)
Weekend - Jean-Luc Godard
Star Wars - George Lucas
Posted by Bence at 6:52 PM

Email ThisBlogThis!Share to TwitterShare to FacebookShare to Pinterest
Labels: 8 1/2, a clockwork orange, jurassic park, requiem for a dream, Steven Spielberg, the 400 blows