New RNC Advertisment is About as Necessary as a Submarine with a Screendoor. 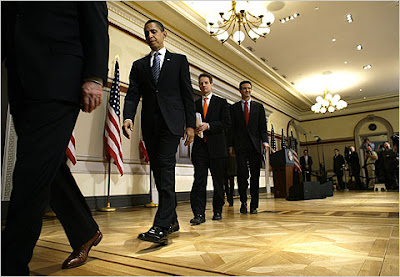 Whoa there, Silver! Mighty tough in these parts to formulate a decent political opinion (Spits tobacco unto ground). It seems the Republican National Committee is engaging in some good old fashioned political posturing which is about as useful as a thumb on a rooster. Now, I viewed a commercial on the moving picture box at my friend, Bodean’s house and frankly, I found it to be the worst thing mine eyes have seen in recent memory.

Evidently, the vitriolic carpetbaggers at the RNC feel that President Obama is “running the nation off a cliff.” This is kind of specious considering the United States racked up more debt (through spending and other shenanigans) under his predecessor than a pig eating at a trough. Furthermore, to say that Obama keeps taking “left turn after left turn” (nice political imagery though) makes the whole thing more absurd. After all, any hand with a few beans in his can would realize this would mean that he would be going in circles. Which means that he would not be able to make it off that metaphorical cliff.

The issue remains, Obama might not be the best president but he is not the worst. He happened to grab the reins of a nation at the wrong time. He inherited two costly wars (yet, they are both considered his doin's), the stimulus legislation and an inability to end the tax cuts established by George W. Bush. Now, we are approaching the eleventh hour battle to raise the debt ceiling. It kind of makes a guy want to spit (Maybe I will). Anyway, what do I know… I am but a simple farm hand. I take your leave. High ho, Silver! Away!