Today marks the two hundred and thirty-fourth birthday of America. I must say that you are looking good. Have you had work down? Regardless, I hope I will look as good when I turn 235... Oh wait, I will be worm food. The past two centuries have been quite the ride, we certainly have had our ups and downs but you still endure. This marks the second celebration of the birth of America with the first examining the ten aspects that make this country great. 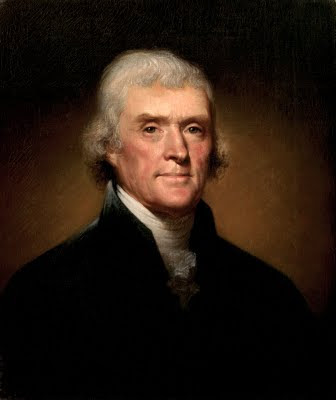 This year, I would like to profile a man who makes the Dos Equis spokesperson look the like dullest in the world. Thomas Jefferson would be considered a great man in any century, let alone the one in which he lived. For many he is just a man whose portrait appears on our the two dollar bill and the nickel, writer of the declaration of independence and was the third President of these United States. His reputation has been reduced largely to ridicule (by those who wish to simplify everything) because his relations with Sally Hemmings but he still is considered one of the greatest Presidents in this nation's history.

Rightly so, he is a man whose mastery of the English language makes Shakespeare read like a Stephanie Meyer novel. He literally illustrated the innate power of mere words. He was a true polymath who was the master of several subjects, his tongue could speak five languages and his mind never quit turning. He was an inventor, diplomat, revolutionary... The list goes on and on. He singlehandedly rebuilt the Library of Congress (with his massive collection of books) and started his own university (The University of Virginia). I suppose I should conclude my gushing over my personal favorite of the founder fathers because it would go on well into the evening and many of us have plans for fireworks later. So, raise a glass and lets toast to one of the men who risked his life to spawn America. Here's to you, Mr. Jefferson...

and here is to you, America... Happy Birthday.

As always your humble wordsmith,
Manny Funkowitz
Posted by Manfred "Manny" Funkowitz at 10:42 AM