Potholes in my Slang 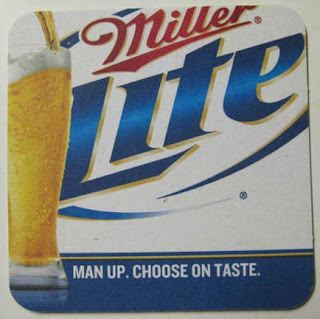 I've had numerous beefs with pop culture America. The main beef I have with it is the continued plagiarism of urban/hip hop culture. You see and hear it everywhere and it's quite offensive if you ask me.

Most of you who watch network television have probably seen the Miller Beer commercials where they use the term "Man up" like verbal diarrhea. I have a problem with the commercial on so many levels but here is a couple of observations:

-The premise of this campaign is that if you drink a lite beer other than Miller, you are less than manly. To which I reply, when the f*ck did drinking ANY type of lite beer become a manly thing to do? Counting calories...more manly then shaving your face with a bowie knife and no shaving cream.

-Furthermore, if your trying to sell your lite beer to alpha males, you need to add some protein supplements or Four Loko that shit and add an energy shot to it.

-By using slang that was used on the street 10 years ago and try to pass it off as something fresh, you have created a slew of "squares" who are convinced that they are using the latest slang and so much in fact that they have to make vanity plates, t shirts, and other chotchkies using the phrase to reassure everyone who sees them that they are still "hip".

If this is the way you choose to advertise and push your products on the squares dying to show how much of a man they are, may I suggest another product that you guys actually make as well: 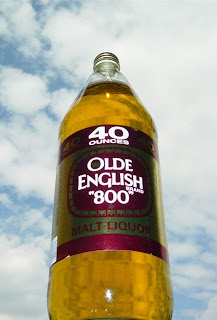 Olde E Gold. Good old fashioned Malt Liquor. There is no way that you can drink one of these and not look manly. Drinking a 40oz immediately says two things about you:

A. I'm too manly to drink less then 40 ounces of beer at a time and
B. I don't care about calories, catch phrases, or corporate America telling me what I should drink

So next time you feel like drinking a beer that pop culture tells you is more manly, Mr. Squarepants; I suggest you tell them lite beer is for suckas, head to the corner store, and cop yourself the 2 for 5 special. Then, tap the bottle, twist the cap, and pour some out for all the pop culture sheeple helplessly addicted corporate America's teet.
Posted by Gonzi Supreme at 3:27 PM