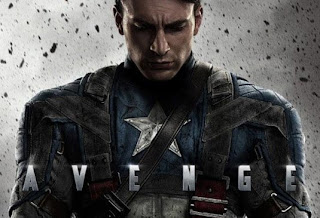 Joe Johnston can now say he's made TWO good movies. Marvel has had a great summer. X-men really brought that franchise back to the status it needed to be and Thor, well Thor did the impossible and made an accessible movie while still respecting the character. Now with Captain America: The First Avenger, Marvel has finised its five film prelude with another solid entry, and prepped itself for The Avengers coming next year. Johnston really manages to tell a simple story of heroism here, where there are no gray areas. It's a great adventure story that is straightforward and entertaining throughout. Some amazing performances and some awesome design make this film one of Marvel's best. Is it perfect? no of course not like I said it's a simple film so that definitely holds it back a bit from getting into X2 and Spiderman 2 territory, but Johnston has laid some nice groundwork for future adventures with Cap. 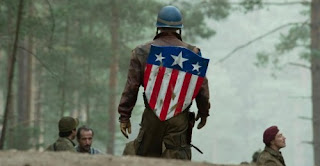 I mentioned that Branagh really had an impossible job in that the world of Thor would be so hard to bring to the screen, let alone make sense within the world of Downey's Tony Stark. Captain America is definitely a much easier sell, but the challenge really rested with the Captain himself. Johnston needed to make a film that showed his origins as well as bring him to a point where we believe in him as a leader and as a the representation of honor and loyalty. Again we needed to believe this guy could stand up to Tony Stark and Thor as well as tame the Hulk. Evans accomplishes this in spades. His Steve Rogers is perfect. Marvel has really got its casting down, even Manny will admit that. I mentioned in one of my earliest articles that Evans is an amazing actor who is extremely underrated. The guy throws off any cynicism and sarcasm you might be used to and replaces it with sincerity and perserverance. Evans manages to make this character a boy scout and without any extreme charm or wise cracking make him entirely likable and relatable. The movie really rests on his shoulders and he carries it well. 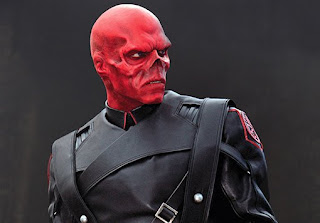 The Red Skull is the complete opposite of Evans' Captain. Like everything else in this movie there are no real gray areas, there is really only good and bad, and Hugo brings the bad. Weaving does a great Red Skull and while his character is not as tortured or scheming as Loki or as perfectly complex as Magneto, Weaving still brings plenty to like about the role. First off his character is never twirling his moustache and laughing maniacally, much like Evans he is driven by an unyielding perserverance but instead of saving people he destroys anything in his way killing plenty without remorse whether they be his own men or the American soldiers coming for him. 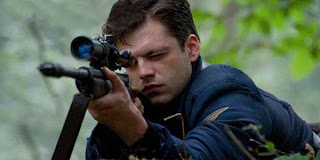 Much like the warriors three from Thor, Cap is given the Howlin Commandos who all bring some nice idiosyncracies to each role. My biggest gripe here is that they are not nearly on screen enough. Tucci and Jones turn in strong performances as the scientist who creates the serum and the army man who trains cap. Its nice to see Jones do some solid work and he fits in perfectly here. Tucci needs an all star award for being the best supporting actor of his generation. The guy really elevates everything he's in and truly inhabits each of his characters no matter how big or small. Atwell is fine as Peggy Carter.....pay attention Blake Lively....this is how Carol was meant to be played. Bucky has a smaller part than I would have liked, but there are some nice hints at his future as the Winter Soldier. The two seconds he holds the shield is a pretty great geek moment.

I really love the set design for this one all the way around. From the Tomorrowland aesthetic of the Stark Expo to the awesome cold mad scientist world of Hydra. Speaking of Hydra, I was digging their outfits, they fall a bit into nameless soldier number one and nameless soldier number two...and essentially just become gun fodder(shield fodder?) Johnston takes you to a different time period and grounds it just enough in both reality and fantasy that everything is believable and incredible at once.

One of the biggest complaints people had about Thor was that it felt too much like a means to an end in regards to its connection to The Avengers, and to some extent I can see that. I still really enjoy the film, but yes SHIELD played a much bigger role in that film than in any of the other films. Here that is definitely not the case. We get some loose connection in the form of Howard Stark playing a major role as an arms manufacturer/Q type character, and of course the bookends to the movie brings us into the modern day. But this film really is unlike anything Marvel has done, they have managed to make a period super hero film. It was definitely the right choice to keep this movie set during WWII, and I'm happy to say they pulled it off. I think more than anything this film along with X-men: First Class shows what can be possible when you try to do something different. 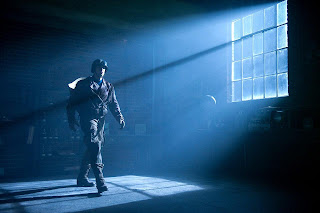 I've always liked Cap and Johnston brings him to the silver screen in a big way. He tells the story of his origins with confidence, and again for better or worse he keeps the story simple and concise. Boy wants to join army for country, boy gets chance, boy gets super serum, boy becomes symbol, boy becomes leader, boy becomes hero. Reverse all of those and you have the character arc of the Red Skull. There's no complicated family drama, or blurred lines between good and evil. There is just a young boy from Brooklyn who is given a chance and becomes one of the greatest military heroes of all time and will go on to lead the Avengers. Its a fun escapist film that manages to tell a good story with some great performances. I'm sure Manny will be unable to hide his hatred for Marvel properties once again, but for me Marvel has had a great summer and this is a great way to finish it. Above all else, Evans brings it, I now believe he can lead the Avengers. So I know you want to know about the teaser after the credits? Have patience readers...I'll be sure to give my thoughts soon don't worry.

The summer is beginning to wind down. I have a few films left on my list, and then I'll be sure to give you a wrap up soon. So far X-men holds the number one spot in terms of comic book films, followed by Cap. As far as best film overall? well that's gonna be harder than I thought. I'll let you know in a few weeks.

One last thought - The Amazing Spider-man teaser played before the movie. I like what I see so far....Webb has definitely gone for a more realistic and somber approach. That's all well and good, but Spider-man needs some lightness to it. Not like Fantastic Four, but Spider-man is not The Punisher, or even Daredevil. I have faith in Garfield though and if anything they are doing a great job at separating themselves from Raimi's films.
Posted by Bence at 9:52 PM