Tryin' to get to Tucson before they close the Door: Bob Dylan & his Band live at AVA... 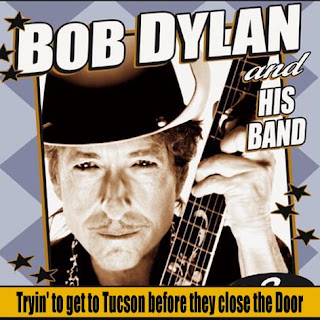 "Gonna sleep down in the parlor and relive my dreams,
I close my eyes and I wonder,
If everything is as hollow as it seems,
When you think you've lost everything,
You find out you can always lose a little more,
I've been to sugar town I shook the sugar down,
Now I' just tryin' to get to Heaven before they close the door..."
~Version of last verse of "Tryin' to get to Heaven" from Tucson~

Well with a trip to a rainy Tucson on Tuesday, my days on the Never Ending Tour Train has ended for 2011. Two shows in and two memories burnt, I can’t remember the last time I so enjoyed a pair of Dylan shows as these two. Onto Tucson, friends… 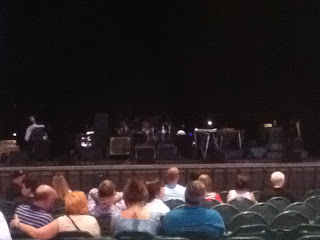 The Venue – AVA Amphitheatre: I’ve only been to the AVA once, back in the summer of 2007 to see…you may have guessed it, Bob Dylan & his Band. 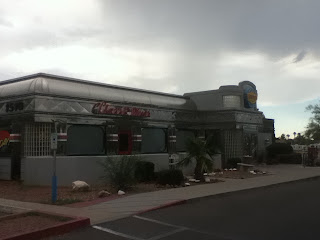 I even ate at the same “Classic Denny’s” (still the only decent Denny’s I’ve ever gave patronage to) I did four years ago...in fact, it was another overcast, rainy day in 2007 as well... Ultimately the city of Tucson housed one of my greatest concert memories ever, when I got to hang backstage with Dylan’s band in 2006. Though, sadly, our friend who got us back there has since passed away, I never forget that moment or him when I go see Dylan here. The AVA is much like any amphitheatre, it’s always nicer to have a seat under the shaded areas rather than the lawn seats. The seats in particular here are rather roomy, and the security, while being a little tight during the show at times, are very friendly overall.

The crowd was much more enjoyable this night, as they were here to see and enjoy Dylan. I talked to a few who were at the Phoenix show, and they all agreed with me about the idiot audience members. Here, I didn’t have to listen to anyone yell “sit down,” no, the only yells and calls I heard were positive ones. Some with hilarious results…

Guy near me: "That means you’re a homo!"

Drunk Audience Member: “For Bob Dylan I am, YEAH!” 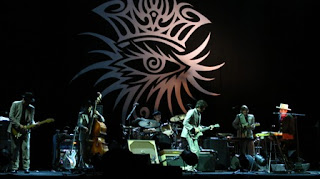 Note: As Lady Hawk wasn't at this show, the below pictures aren't from the Tucson show, but just for dramatic effect. Audio below is from me as usual, though...

The Only Act You Need - Bob Dylan & his Band: Let me just say it, I felt bad for Dylan and his band on this night. It was humid and muggy, and up until the last couple songs, no breeze. They’re up there not only playing in bright lights, but those overly hot cowboy suits. I noticed Charlie Sexton ditched his jacket in between the main set and encores. However, they didn’t really let it effect their performance much, besides maybe missing out on the second encore of “Forever Young” New Mexico got at their show earlier tonight, seriously, where was that for us!? 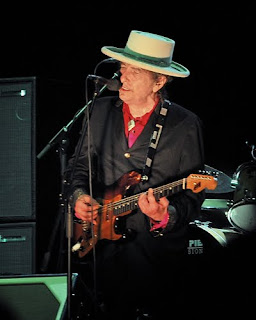 The setlist had some carry over from the night before, thankfully though it was mostly the best numbers such as “Tangled up in Blue” and “Ballad of a Thin Man.” I mentioned last night how Dylan doesn’t re-arrange songs night to night, but can change the dynamic of the same song. “Things Have Changed” was a perfect example tonight, as it was the same great re-arrangement of the Oscar winner as Phoenix, but this time Dylan added in harmonica and it changed the dynamic of the same basic song. All in all, it was a heavier night on the mouth-harp for Dylan, though lighter on guitar. He made up for it though on the one song he played axe on, “Beyond Here Lies Nothin’” as he suddenly came down with a case of lead-itis and went all Hendrix (or as Hendrix as Dylan can go) on the guitar over the last few minutes of the song. A definite highlight, and it was nice to see his performance on it build up the audience reaction to a near explosion by the end of the tune.

The two tunes I was hoping to hear at this shows was the recent blues-rocker opener of “Gonna Change my Way of Thinking,” and to once again be blessed with “High Water (for Charlie Patton).” I didn’t either, but other tunes made up for it: I’ve heard “Rainy Day Women” plenty before, but opening up with it at a college town really worked well, “Levee’s Gonna Break” is a song that doesn’t do much for me on the album version, but live it always cooks more. “Forgetful Heart” was a real showstopper in all it’s eerily-arranged glory. Dark and forbidding, with a Dylan vocal and harp work to match – “Forgetful Heart/like a walking shadow in my brain/all night long I listen to the sound of pain/the door has closed forevermore/if indeed there ever was a door.” “Visions of Johanna” is likely the most name-checked song when bigtime fans talk about his most poetically perfect/well performed song. They’re talking about the album version, and rarely does a post ’66 performance work. I saw it in ’08 in Dallas and honestly, it was nice to say I heard live, but nothing more. Here though, the arrangement worked okay, but more than that, Dylan’s vocal did. Ditching the gravelly bluesman voice he sang his heart out on the song. It was nice to see ‘Time out of Mind’ to get some loving at this show, and hearing “Tryin’ to get to Heaven” reminded me of how much that album affected me personally back when I started listening to it in college.

Dylan once again spent a good deal of time up front center stage, usually just with a mic and bullet-mic for his harmonica, and being dead center for the show made those moments the most special of the night. Most notably on the Grammy award winning “Cold Irons Bound.” I didn’t think he could top the ‘Mased & Anonymous’ version, but this may have come close. What made it better is the way as the song built and built to it’s climax, with each stop and start the band performed on the number between verses, the audience reaction too built up and up. It was also nice to hear so many people asking what song it was, I really hope they seek it out, it’s “what a great tune,” as one guy said afterwards before asking what album it’s found on (the original version is on ‘Time out of Mind,’ BTW).

All in all? Another great show by Dylan and his band, I really can’t remember the last time I enjoyed a pair of Dylan shows this much, and coming from me, that’s saying a lot…

Overall Score & Highlight of the Night: Dylan isn’t the greatest guitar player in the world, but he can do what he does very well when he wants to, during “Beyond Here Lies Nothin’” he decided to go all Hendrix on the guitar, and the audience reacted appropriately, it was great. He also delivered his vocal of the night on “Visions of Johanna,” I mean he completely ditched the world weary ragged bluesman voice for it. In the end though, my highlight was the radically re-arranged “Cold Irons Bound,” which actually gave the ‘Masked & Anonymous’ version a run for it’s money.

I won’t rate this show, I just enjoyed it too much. It’s certainly well above a 4 for me. Anybody that could have made at least one of these shows that didn’t, I feel bad, you really missed out.

Tuneful of Sugar: For those who find pretty pictures and mis-used words to not be enough...

Dylan & his Band - Cold Irons Bound at AVA by Hudson-Hawk

Dylan & his Band - Visions of Johanna at AVA by Hudson-Hawk

Dylan & his Band - Forgetful Heart at AVA by Hudson-Hawk