The Twitter Town Hall: A Resounding Success for the Apathetic and People who Thought They Were the Class Clown in High School. We all know my stance on Twitter and it really is akin to me beating a dead horse at this point. I have long felt that if Twitter is used correctly, it could be a fantastic tool for social change (Look it what it did to the Middle East earlier this year). Otherwise, you have a platform for celebrities and unknowns posting the first thing that comes to their heads (Sadly, no one is interested in the poptart you had for breakfast or your growing excitement for Crazy Feet 2) Of course, if any of you interweb denizens are bored then why don't you stop by our Twitter feed:@PORTEmaus. Woeth me, this irony be crushing...

Thanks Twitter for reducing my question to the rambling of a simpleton.
Anyway, last week President Obama ventured into a brave new digital world when he took the concept of a town hall and made it global by allowing anyone with a Twitter account to ask him a question. I will be honest, this is a far more direct way to speak to the President of the United States than through snail mail. I finally received (just this month!) a response to a letter I sent congratulating him on his victory over McCain in November 2008... Sadly, I think his signature was autopenned.

This might come as a shock but the whole thing was a bold move on his part. It could have ended up one of two ways: either as a smashing success or it would blow up right in his face. Sadly, it seems it was the latter. Turns out that only thirty-six percent of the 169,000 seemingly "sweet" tweets dealt with important issues facing the United States. What were the sixty-four other percent? They were comments that were either snide, snarky, or obnoxious and I think at least one was boorish. Surprise, surprise... When actually a group of people are given a slim chance of having their voices heard (outside of yelling during The State of the Union or hurling a shoe) by the president, they decide to use Twitter to highlight their apathy. Good show, old beans. 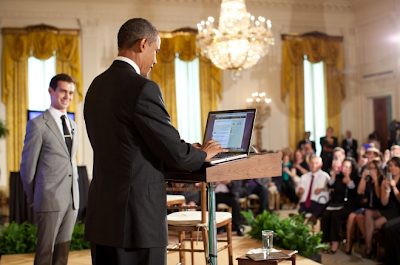 When I began this post, I was sure it would become a slam session against Twitter but I can safely say that while I was doing cardio (at a new gym not the Conservative bastion of yore) and witnessing this on a television... I could not help but cringe. I do not know if the whole thing was a bid to appear hip or there was the hope that those participating would actually care. After the fact, I kind of feel bad for the American democracy and everyone involved, if this was truly the best that our fellow citizens could muster. Looks like it is back to watching twenty-hour cable news shows for old Manny Funkowitz to participate in American politics. All in all, you cannot fault President Obama for attempting something new... If anyone is looking for a scapegoat, might I suggest the gent with the creepy uncle grin and the seersucker suit from the picture above this paragraph. Oh, he is the inventor of Twitter, you say... Ding ding, we have a winner!
Posted by Manfred "Manny" Funkowitz at 7:24 PM