Weekly Wish List UPDATE Uncle Boonmee Who Can Recall His Past Lives....the title is long enough...check this one out 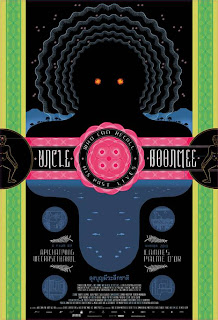 Alright so here is the name of the director Apichatpong Weerasethakul.....he says its ok to call him "Joe"....true story. 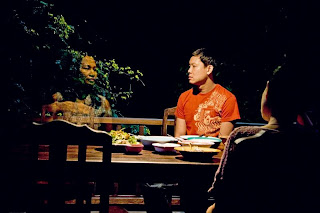 Uncle Boonmee Who Can Recall his past lives is a small picture with some some huge ideas. Uncle Boonmee finds out he is dying and returns to the countryside to spend some time with family. Upon returning he reminisces with his sister in law, nephew, dead wife, and a son who's been turned turned into a ghost monkey. Throughout he begins to experience his "past lives" and we get a full picture of life lived that is about to end. The film moves at a very deliberate pace often times letting the viewer see the gorgeous nature that exists in Thailand for long stretches of time with minimal dialogue. It is an obtuse film that will surely reward everyone willing to accept its inherent "weirdness" and experience all it has to offer. Joe injects a subtle humor throughout the film....as the viewer sits "shocked" at the dead coming to life or monsters sitting at the table...or fish mating with princesses...the people who exist in the film seem to all accept it with a slight sense of awkwardness. This humor is charming and pulled off very well...never being laugh out loud obviously, but definitely creating an air of lightness in an otherwise serious film.

This a film open to interpretation and there is plenty here to discuss. Which if any of you out there happen to see it I'd love to hear your thoughts, but for the purposes of this article I want to focus on just a few things. First off is the theme of returning to nature. There is a sense that nature is where we have come from and ultimately where we will return to. The film starts off with a simple scene in the forest and ends in a city full of civilization. This shows the journey of society from life in nature to life in the city. Boonmee moves to the countryside in order to finish off his last days with family. This suggests that in nature one can escape the mechanical emotionless nature of the city and return to a simpler time in which family was the most important thing. This is reinforced again at the end when everyone is simply watching tv as the movie finishes, rather than talking with each other as they have for the while movie. 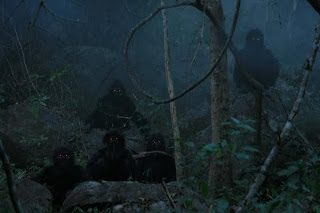 I don't want to spend too much time on his dead wife as I saw her as being a representation of how close he was to death. Rather I think the monster son is the more interesting character and more relevant to my point. I mentioned that nature can provide a simpler truer existence away from any of the constructs of civilized life. Here we see a young man caught up in the beauty of this naturalistic lifestyle that he soon becomes a part of it. The son sees these monsters in the woods and wants to capture them on film, but as he pursues them he begins to love them, and ultimately becomes integrated within their culture. The son is that part of you that knows that nature is our true home and the place where we came from. He understands the beauty of it and embraces it rather than shrugging it off for technology. 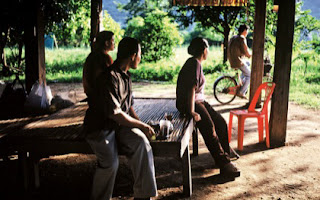 The last thing I want to talk about is the duality of identity. The film is about this man "recalling his past lives", in many ways this is simply him recounting various times in his life and the people he's encountered and how they almost represent different people. This idea that our self is made up of multiple personalities is shown with a couple of simple scenes. I've already discussed the son venturing into the woods to discover these monsters and become one, so obviously you can say the polar opposites there. I want to talk about the last scene in which a monk comes into his sister in laws room. A monk comes in and they share small talk and the monk changes from his robes into street attire and he becomes a completely different person. This simple scene has shown just with a quick costume change the different lives we inhabit throughout our existence. The last shot of these people watching TV....then panning out and us seeing that there is another set of the same characters watching them watch TV says so much about the film and its views on identity. We are privy to the "end" of one life(those watching TV)....and the beginning of another(those watching them watch TV) as a new chapter begins for these characters. 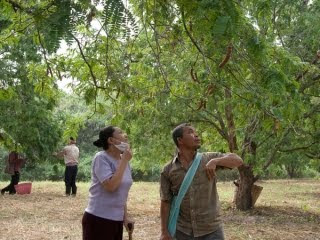 I could go on and on about this film...and to be honest I've barely scraped the surface. I hope you all search this out. It is a weird slightly surreal dreamlike film that never plays it safe. With beautiful cinematography and subtle humor throughout this is exactly why I love to try out new directors and search the world for great cinema. 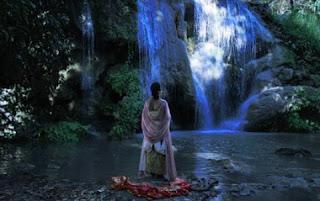 One last thought - the fish having sex with the princess.....I mean you can form your own thoughts on what that means in terms of our relationship with nature right?