Best Punch a Hole Through Your Tricorn... It Seems Your Movement is not Considered Popular by Mainstream America anymore (Not that it ever was) 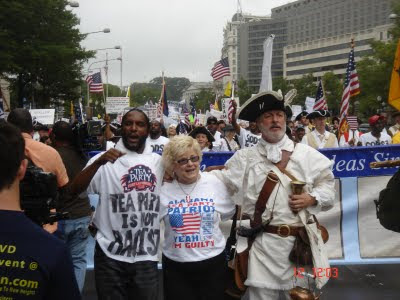 Sometimes I sit around the fire in my leather easy chair stroking my patchy beard while smoking my pipe. What I am doing during this exercise? Pondering. I ponder, think and wonder about how a simple man such as myself became ahead in the American political game. Case in point, The Tea Party... I have extolled my exasperation at this movement (publicly) well over a year ago. For you see, I do not buy into it and this is not simply because I am more liberal than anything.

Perhaps, I will let a pearl of Granpappy Funkowitz set the stage for me. My Granpappy used to say, "You could put lipstick on a turd and call it a "scone" but it is still a turd." Truer words hath never been spoken, rest in peace Granpappy. This is the long and short of it. The only difference between the Grand Ol' Party (Regular Conservatives) and the Tea Party is that the latter knows nothing of political compromise (or how to engage in "politics") and exhibits a level of petulance on par with a bratty seven year old.

I had mentioned earlier that I have become ahead of the curve. A little self-aggrandizing I admit (apologies all around dear reader) but it serves a practical purpose. A study has revealed that the Tea Party is less popular than Atheists and Muslims. Surprise, Surprise. All of the media attention and hype has proven to be less than true or even astute. None of this really matters considering the American media covers nothing more than just celebrity gossip (I do not care that Snooki can do a cart wheel) and spurious events of the day (A cat hang glided through a ring of fire? You don't say. I do believe I have heard everything... I have seen a house fly after all).

Like I said, I never bought that this movement was "spontaneous" and comprised of political neophytes. Anyone with at least one working eye could see that it was the same Conservative thing but by a different name. Calls for Tax Cuts! Smaller Government! and Free Enterprise! are gasp, basically Republican. Now, I commend that this people took to the streets... At least they are exercising their Democratic rights. I also congratulate them for coming across as "crazy." It will allow everyone to see a splitting of the vote in electoral contests not seen since 1912 Presidential Election.

At the very least, I feel bad for Atheists and Muslims... Why are they so unpopular? It might not matter much but you guys are alright in my book.

Posted by Manfred "Manny" Funkowitz at 11:49 AM