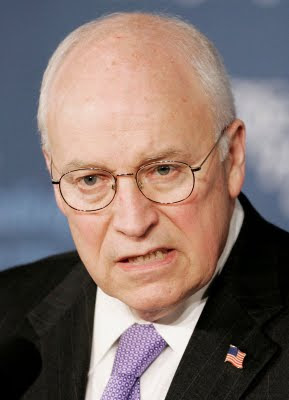 It has been revealed that Richard Bruce Cheney, known affectionately as "Dick" or Cheney had composed a letter of resignation. Before the thought of rats leaving a sinking ship burst into your minds, Cheney wrote it for practical reasons. He felt that their should be a contingency should have become incapacitated. You know, his repeated trouble with heart attacks or the fact he had 37 of them before/ during the time he occupied the vice presidency. That's Dick for you, always thinking about others.

Dick asserts that there is no mechanism for getting rid of a president who cannot function, which is true (see 25th amendment). The argument can be made that a wanton disregard for humanity and engaging in nefarious activities could be considered "insane" and thus, he would be incapacitated from a mental standpoint. I know I am grasping but seriously, how can anyone sleep at night that condones waterboarding. Then again, it is hard to be insane if one does not feel that waterboarding is torture. I bet Cheney is a gas at holidays and family gatherings.

I have to say, I am intrigued by what the letter says. I have a feeling it looks a little something like this: 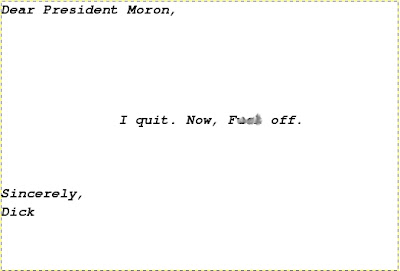 Cheney is the American Political Shakespeare

The thing that bothers me about Cheney's admission is that he acts as if he was doing America a great service by writing a resignation letter. The whole thing seems trivial in my honest opinion especially since the Bush Administration were experts at legal maneuvering (to put it mildly) and would have found a way to remove a comatose Vice President. Maybe I just find it more humorous that he would resign because he feared that he would be incapacitated for health reasons and not for something like shooting someone in the face with a shotgun. Granted, he did think it was a bird and the guy he shot did apologize to him... Oh Cheney, when will you ever learn?
Posted by Manfred "Manny" Funkowitz at 1:47 AM