The Debt Ceiling Crisis... Further Proof that American Politics is a Farce 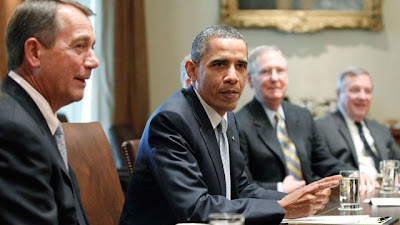 In a display of one-hundred percent grade A American procrastination, the House of Representatives have passed the measure to raise the debt ceiling and avoid defaulting on loans. Honestly, I am glad because now I do not have to hear about it everywhere. The media ran around frothing at the mouth like chicken littles prophesying the falling of the sky. While I confess that I am but a simple-minded fellow, it did not take much to see that a deal would be made...

Low and behold it was passed... Let me tell you it was underwhelming and oddly enough it was very partisan. Suprise! Suprise! Regardless of your political persuasion or even your thoughts on the deal are irrelevant. The point people do not realize is that this was an ugly presentation of American politics. The debt ceiling could have been raised with little fanfare had both sides (yes, both sides) did not draw attention to it.

Sadly, this was nigh impossible since one side (which will not be named... Try and guess though) dug their heels in at the very start of a negotiation. Good job, then lets go ahead and push it to the wire. Genius! It was coercion at its finest... If you do not pass our cuts then we will make the United States default on its loans and such. This whole thing has been galling to ol' Manny Funkowitz since it is obvious had that happened everyone would have to fear losing their jobs. John Boehner, here is a little lesson in American politics, you cannot blame someone (the President) for something that he is not capable of doing (borrowing money) because it is a power given to Congress by the Constitution. Seriously, I learned that in my second grade civics class.

You (John Boenher and other Congressmen) want the United States to have a lower deficit? There is a simple solution. Actually, there are several. First, quit offering tax breaks to everyone (I could care less if I get 300 bucks back every year), it is simple mathematics (less money coming in than out means DEFICIT) Secondly, simply cutting things will not remedy deficits because there is not enough tax revenue coming in (see Number one). Thirdly, if you cannot seem to grasp these altogether simple concepts, hire a competent accountant... You know someone who can add and subtract large sums of money but can also deduce the amount of money to accomplish something. In the end, I guess it does not matter since the credit rating was downgraded anyway (But that is a story for another time, I suppose). Damned if you do and damned if you don't.
Posted by Manfred "Manny" Funkowitz at 4:20 PM