"I do not entertain hypotheticals. The world itself is vexing enough:" True Grit 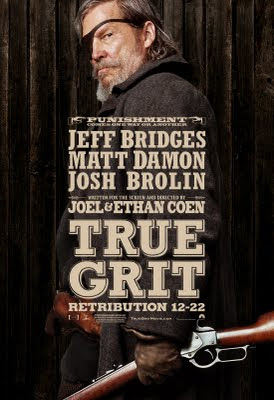 At the end of last year, The Coen Brothers version of True Grit topped my list of ten films for the year that was 2010. After completing the novel the film was based upon, it provided an opportunity to watch the film again and see how it holds up. Would it be like The King's Speech and be better on its repeat viewing? We shall see.

Retribution. This is the core idea or value behind the story of True Grit. Mattie Ross (Hailee Steinfeld) has made it her mission to avenge her father who was murdered at the hands of Tom Chaney (Josh Brolin). As she conducts closing her father's affairs in Fort Smith, she is also on the lookout for a man with "grit" to apprehend Chaney and insure that he is brought to justice. 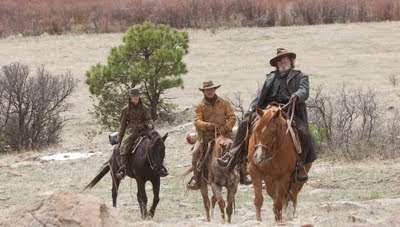 She is given many names of many officers of the law but settles on Rooster Cogburn (Jeff Bridges) because his history for taking men dead over alive. Their paths also cross with a Texas Ranger named LeBoeuf looking for Chaney as well. The bulk of the film follows the trio through Indian country looking for their prey. Through a series of circumstances (namely, Rooster getting drunk and leading them too close to Lucky Ned Pepper's hideout), Mattie comes face to face with the murderer of her father. 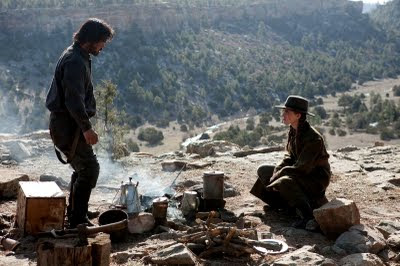 After watching this film for a second time, I still enjoyed it immensely. It maintains the humor of the novel and flows really well from scene to scene. The Coen Brothers script made little changes from the novel with minor characters being omitted which led to minor story changes. Honestly, it was nothing that would make some say, "Consarnit! This ruined the film or book." In fact, the screenplay borrows heavily from dialogue in the book (which was not a bad thing), it just shows how great the novel was.

The acting was impeccable. Jeff Bridges did an amazing job to bringing Cogburn to screen. Hailee Steinfeld had (arguably) the toughest role of them all since she had to show that she was more adult than her age. This could have went the other way had the wrong actress been cast. As for Damon, it looked like he had a lot of fun with the LeBoeuf character and this comes across with his delivery. Finally, I thought Deakins did a wonderful job with his shot selection but I agree that Pfister was more deserving of the Oscar. Once the credits were rolling, it was clear that none of my enjoyment was soured from the first viewing nor was I upset that it was not a carbon copy in the book. Would it still top my list of top-ten films for 2010? Kind of irrelevant at this point but it is a wonderful film nonetheless.
Posted by Manfred "Manny" Funkowitz at 10:17 AM