I Used to Encourage Everyone I Knew to Make Art; I Don't do That so Much Anymore: Exit Through The Gift Shop

Film Foray Cavalcade no. Veinticinco: Exit Through the Gift Shop 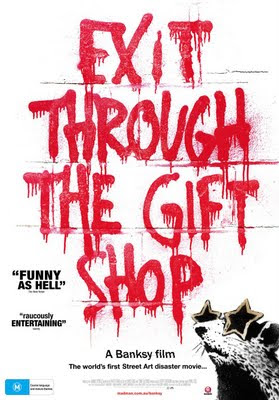 Exit Through the Gift Shop

This entry in the cavalcade is what Bence would describe as "Funkowitz playing catchup with 2010" and he would be correct in this assumption. Truth is, I sat on this film since its video release much like Restrepo, perhaps of being disappointed (based on my hopes) or maybe I wanted to delay the experience of them. Regardless of the decision waiting to watch this film was a mistake. Frankly, the documentary delivers on all levels, it was an intriguing look at contemporary street art and the overall decline of modern art because of the appearance of Thierry Guetta. 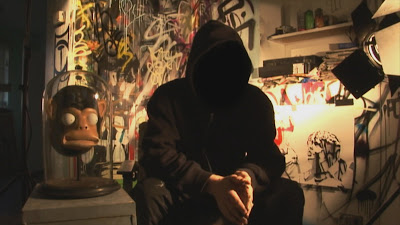 What is the difference between vandalism and street art? I felt the film did a wonderful job at making a distinction. Simply, vandalism is the simple rubbish that youths "tag" on a wall, street art goes much further. Sure, it could be sticker, print, installation or stencil but the end result leads to contemplation on the witness of the work. Exit Through The Gift Shop takes the viewer in the subculture that is street art told through the lens of self-proclaimed "filmmaker," Thierry Guetta. Thierry Guetta followed numerous street artists for several years compiling thousands of hours of footage. After the commercialization of the street art culture, Guetta was tasked with making a documentary with setting the record straight about the movement with the general public. It was a failure.

At Bansky's suggestion, Guetta decided to become an artist in his own right. The end result of that venture revealed many things about Guetta, the focus of the film. He is an opportunist, who represents the bad aspects of what has become of street art. The closest comparison of Guetta is Warhol and at least Warhol was more of a cultural phenomenon than an artistic one. Guetta is a self-aggrandizing photoshop artist who does not create his own work. Personally, I was more than excited that both Banksy and Shepard Fairey condemned him at the end of the film. It was more than appalling that his first show was a rousing success and that the Los Angeleans in attendance ate it up. All of the art there was tripe. 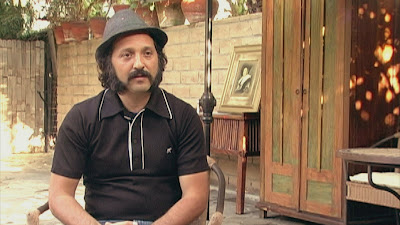 At first impression, Guetta was a decent bloke following street artists because he found them fascinating and this was an admirable purpose. By the end, he was petty and altogether minor artist who was closer to Napoleon than an artist. Sadly, people bought into his collection of art and he continues to propagate crap, which is a horrible realization for the art world. People argue that this film is fake and personally, I disagree (something that I cannot say about Catfish which was horribly fake) . Honestly, there is too much depth to it and I felt Banksy is sincere when he said that he wants street art to be about art and not the money. Anyway, real or a fraud is irrelevant as it (much like street art itself) too thought provoking and too accurate in its critique of modern art.

Postscript: I would like to commission Banksy to do a PORTEmaus inspired work since he has a history of doing stencils of rodents. 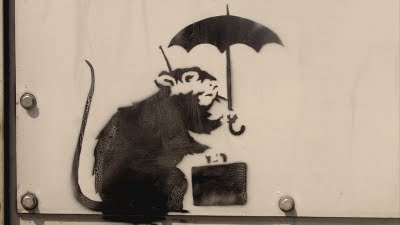