I'm not Going to Basra: The Devil's Double 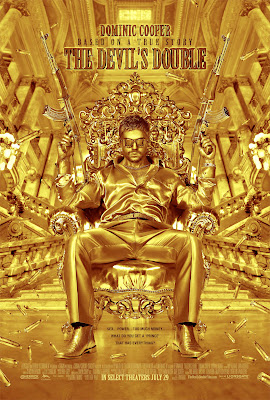 The Devil's Double
Bence asked why I saw this film during one of our daily communiques and I did not have an answer for him (At least not one with much confidence). Perhaps, I enjoy shiny things and was entranced by the garishness of it all. Certainly, it was nothing to do with this movie. That is kind of harsh, The Devil's Double is not a horrible film, it simply is not a good one. After an hour and fifteen minutes, I was left with two impressions, one was that this felt too much like a made for A&E feature (than a commercial release) and also that the film was pointless. 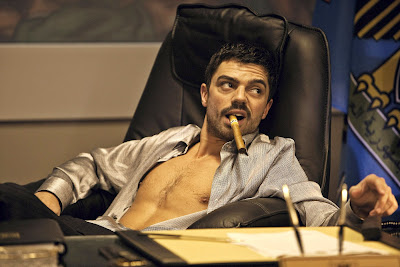 First impression about the idea behind The Devil's Double is "that could be good if properly executed." Well, when your script is stale and you add a lot of fiction it kind of loses its credibility for telling a real life account. Furthermore, you add the guy who singlehandedly ruined the Bond behind the camera and you have a mess on your hand. With these considerations and others, you are left with a film best described as the Iraqi version of Scarface (Gonzi hit the nail on the head with that description).

The Devil's Double spans the course of roughly twenty years in the life of Uday Hussein, Saddam's mentally deranged son and Latif Yehia, an member of the Iraqi military forced to be the former's body guard. The film is chock full of examples of how insane Uday was (which is well-known by now) and Latif is the polar opposite to Uday. After about fifteen minutes, Uday's repeated examples of arrogance, petulance and brutality get old... I for one was hoping that we could make it to 2003 or the year that Uday's reign of terror ended.

Not since Hayley Mills in the Parent Trap has an actor been praised for having dual roles in a film... I am not a huge fan of Dominic Cooper and never really have been impressed by his body of work. I think he was more than obnoxious in Captain America. Anyway, the novelty of this performance wears off quickly because the characters (neither of them) get the audience emotionally involved. Plus, about midway through, Latif basically has Cooper's accent.

People say Dominic Cooper was the price of admission... I think he was good not great and I felt they could have found someone better for the role (Honestly, I do not buy him as anyone but an Englishman... Which is how he came across). Yet, in my humble opinion, the producers and filmmakers were striving to be ok or mediocre rather than great. This was an issue of little production funds (evident from some awkward CG when Cooper is Latif) and a screenplay that left the viewer wondering why they were there. If it was placed in the hands of a better Director than a gent who solicited police while in drag... I might have been more complimentary about the film. I will admit it, I am still sore at driving the sixty miles round trip to see this film. Oh well.
Posted by Manfred "Manny" Funkowitz at 6:39 PM