Life is Wasted on the Living: Greenberg 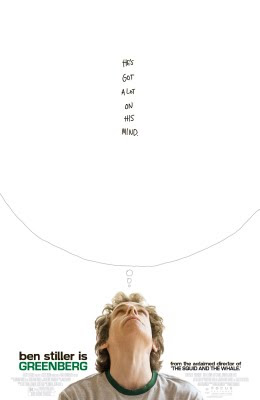 No one can create more realistic dialogue than Noah Baumbach. The Squid and the Whale and more specifically, Margot at the Wedding capture his talent at making people as they seem... Socially awkward, yet believable. Greenberg represents a step backward for Baumbach after Margot, the best film of his that I have seen thus far. Much my Greenberg criticism stems from the fact that none of the characters are particularly likable but I will return to that momentarily. 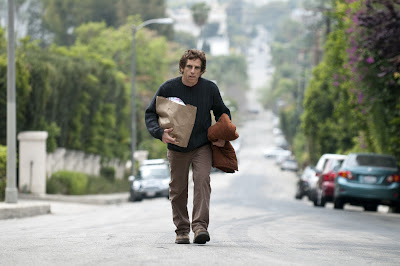 Enter Roger Greenberg (Ben Stiller), the film's eponymous something... Honestly, I cannot come up with anything for him, save for protagonist since he is by no means a hero to be "cheered" on. He is one of the most unlikeable characters in recent cinematic memory. Anyway, after spending time in a mental ward after suffering an emotional collapse. Greenberg agrees to spend six house weeks house sitting his brother's palatial estate and building their family a dog house.

During that time, you realize that in addition to his sense of entitlement and arrogance (both reach insufferable levels), Greenberg has a philosophy. It is one predicated on lethargy and laziness. Wow, with that kind of motivation, it is no wonder that your musical group did not pan out and most of your friends resent you. Yet, not everyone is immune to the Greenberg charm.

This is where the film fails in my opinion, nobody (and I stress nobody) would endure this man. Ivan (Rhys Ifans) would not be friends with him nor Florence (Greta Gerwig) be interested in him romantically. He has no redeeming characteristics other than being a roustabout. Yet, for some inexplicable reason both suffer the childishness that is Roger Greenberg. Repeatedly. Sure, there is the same awkwardness that appears in his other films but it feels altogether forced.

As mentioned earlier this film marks a step back for Noah Baumbach from a writing and directing perspective as both seem uninspired. In the former, there are genuine clever moments (such as the difference between car horn usage between New York City and Los Angeles) and a few others. Sadly, all of those moments appear in the trailer... This is a sad revelation considering Baumbach's past work, the viewer kind of expects more from him. In this case, while there were some entertaining moments, this movie is only worth a rental or avoidance.
Posted by Manfred "Manny" Funkowitz at 10:45 PM