Michele Bachmann and the Right Angry at Newsweek Cover. The World Collectively Groans. 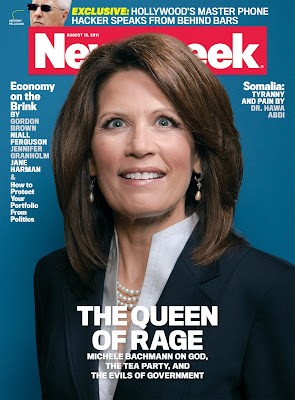 So, this is what passes for controversy in America these days. A haggard (this photograph is anything but flattering) female Republican with a vacant expression. Ho, Hum. Personally, I am curious why Michele Bachmann allowed for this photograph to used for this cover... Talk about the lack of control when it comes to a consistent second place finisher in the news magazine game.

After first hearing about this incendiary (I am using the phrase very loosely) magazine cover, I am curious as to the hubbub. In short, what is the deal. This image sums it up quite nicely, she engages in negative and partisan politics (hence the rage bit) but also looks crazy in the eyes region. Done and Done. Not much to it, yet it received some decent airplay full of gasps by on-air talent and cries of "foul" by those on the political right.

This again begs the question "Why?" or "Who gives a hoot?" The answer to this question is a firm, "I do not know." I really do not. It is perplexing, the provocative choice of words does nothing but sell magazines and everyone knows there is no bad publicity. If I were Newsweek I would agree that the mission was complete, you drew at least four more glances in the realm of possible subscribers, at the very least someone flipped through it at the grocery story. They did not read it though because let's face it, Newsweek is basically tabloid journalism.

As for Michele Bachmann, this will not derail her presidential aspirations, also known as her 2011/2012 summer vacation from the House of Representatives. Sure, it makes her look quite crazy but she does that every time she gets in front of a camera. I guess that this truly was (what we in the business) consider a "slow news day." I am glad to play my part of iconoclast to point of the speciousness of the situation.

After all, everyone in this situation kind of wins, Newsweek gets a few more purchases to come in its firm second place ahead of an equally atrocious US News and World Report. Michele Bachmann gets to look crazy on a magazine cover and does not have to expend any energy to do it (which comes across in the vacant and altogether dumbfounded expression on her face) and the photographer of the cover was able to get some work... Which for those keeping score is the greatest tragedy of this controversy.

Posted by Manfred "Manny" Funkowitz at 3:52 AM