Michele Bachmann Wins Most Trivial of Elections and Yet. The Cameras Keep Rolling.

(Voice-Over) Michele Bachmann, You just won the Ames Straw Poll... What are you going to do next?

(Michele Bachmann) I am going to lose the 2011 United States Presidential Election! Whoo! 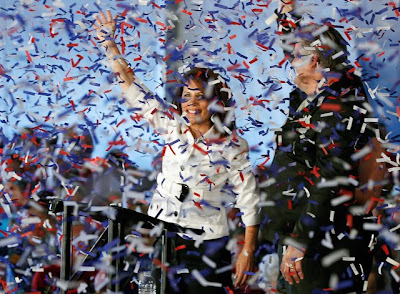 Is there anything more pointless in American presidential politics than the straw poll? For those who care (not me for one), it appears that Michele Bachmann (noted Queen of Rage) and obvious owner of a pair of crazy eyes (You know what I mean... If not see this cover) won the straw poll vote (Also known as the Ames Straw Poll since it is cast in Ames, Iowa). Anyway, that is an apparent digression, for those keeping score, this is altogether meaningless.

Why are they meaningless, you ask oh wise and beloved reader? The answer is that it simply has no bearing on the official Republican primary or even the Iowa Caucus. It does afford some nice publicity (and illustrates a superior field command for buying votes to an unofficial political election) to candidates but let's take a gander at the winners since the poll's inception:

The heart of the Iowa is two-fold. The first part is that it serves as a fund-raising opportunity for Republican candidates and the second is that it illustrates that Iowa (their Republicans in particular) have no idea how to pick a winning candidate or having a bead on what a quality one is. I suppose their only criteria is that they be crazy (See list of winners). The winner of the Ames Straw Poll has later won the Presidency only one out of five times. I am going to go out on a limb and say that Michele Bachmann will not be the second. It should be noted that winners fared marginally better in the Caucus itself winning it three out of five times.

Pointless. At least people pay thirty bucks (the consolation is that you get some sweet barbeque... Wait, I will be there next time!) to vote in a pointless show of political ignorance... Seriously, it was a close race between Bachmann and Ron Paul. Whoo! Neither of these people are going to win! If Rick Perry had not placed sixth (as a write-in) you might have had a stew going. What we learned today class? Iowa has no concept of picking candidates for a presidential election. I hereby soothsay next election's winner... A three way tie between Captain America, John Wayne's ghost and a worn out boot. Watch out everybody, Ron Paul will call voter fraud on those results like he did in the 2007 meaningless straw poll... I mean, Ames Straw Poll.