Preface: It is kind of funny that people did not care that Bush released his memoir, Decision Points but it seems everybody wants a piece of Dick Cheney. I guess they find In My Time to be a better title for a book about a person's life... Perhaps, they just did not want to read a book written in crayon. 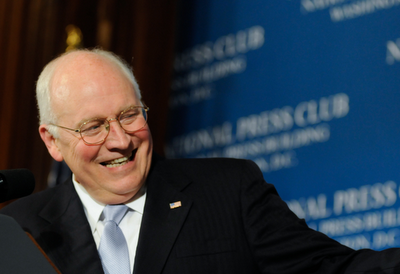 As the week that will be henceforth known in the annals of history as "Richard Bruce Cheney Seven Day Spectacular," this year's festivities were kind of put together haphazardly but next year expect funnel cakes, plate spinning and waterboarding... Lots of waterboarding. In anticipation of his memoir's release, Cheney has been quick to reveal secrets which he held closely to his chest during his time as President... I mean, Vice President. The first was a revelation detailing a secret resignation letter.

Today's revelation involves the exact location of Cheney while he was sitting in an undisclosed location during September 11th. I, for one, have always been curious as to where he and other officials were during that time. I imagined a bunker in the Nebraskan countryside within a silo of nuclear weapons or something. Nope. I guess Fort Knox for be a secure location for a Vice President during a moment of crisis. That's a "no" to Fort Knox as well. What could be more secure and unknown than Fort Knox?

Evidently, his home was the undisclosed location. Seriously? I do not know about you gents but honestly, if the country is in the midst of a catastrophic event, I do not want to hear that the leadership is either sitting mouth agape to the wonders of The Pet Goat or sitting in their armchair at home. I do not care if I am a fan of their administration or not. Call me crazy but I would like think the government would be in control of the situation. If Cheney was going to be hiding in "plain sight," why didn't he just hang out on the White House steps or the Old Ebbitt Grill? Both would be as relatively secure as his house. Then again, I suppose the choice of this location fits the type of response the Bush Administration was known for.