Summer Preview UPDATE...kinda pt 2....Attack The Block...more brilliance from the other side of the pond 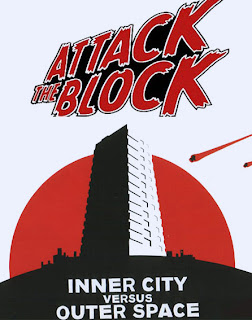 Mr. Funkowitz is visiting my fair city this week. As a welcoming present I decided to take him to the movies to catch a flick that isn't readily available near his sprawling compound in the mountains of the Zone. As much as we seem to differ here on the site, our tastes are actually relatively similar. So it was a nice change of pace that we can share that here with this little film about aliens invading the wrong side of the tracks in south London. 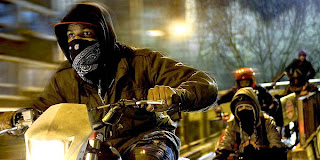 Attack the Block is a film that sneaks up on you. First off it's an enjoyable film from start to finish, and comes out with guns blazing in an energetic and charming first scene(well as charming as a mugging could be). What really blew me away was that as the film progresses you realize just how solid of a film it is. How strongly it begins to tell its moral story of being responsible for your actions and realizing your potential in the worst of circumstances. 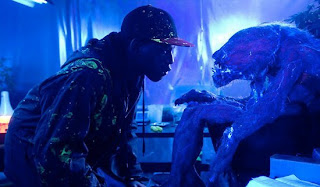 The film is simple enough. A group of friends led by Moses find an alien and kill it, then more aliens come and....well they attack the block. No one believes the kids at first and so they take it upon themselves to confront these monsters with whatever they have. If this sounds a bit like Monster Squad, you're right. This is definitely in the same playground, but while that film had kids speaking like they were out of the eighties, this film has an abundance of colorful English slang. 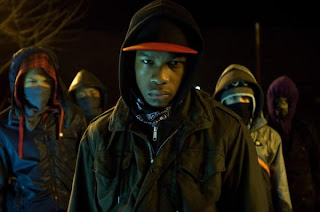 Which brings me to the script. I mentioned in my Super 8 piece that I love it when kids act and talk like kids. Judy Moody...you are the bane of this site....no one likes you because you suck. Here the kids speak like teens should. Lots of slang swearing up and down, they even have the bargaining with the parents down asking "just ten more minutes mum?" But we all know a script should never be all about the dialogue. Joe Cornish gives each character their own entertaining story, never pulling any punches and always ready to let children die in some of the film's most heartbreaking scenes. Everyone from the younger kids wanting to hang out with Moses and his gang, to the parkour enthusiast trapped in the dumpster, the yuppie pot dealer, to the leader of the gang Moses. John Boyega plays Moses with a quiet intensity. He oozes leadership qualities and his revelations about why the aliens have come are played perfectly across his face. The scene where he tells a neighbor his age is an incredible example of subtlety in an otherwise highly kinetic film. An amazing performance and the type that elevates genre films to the next level. 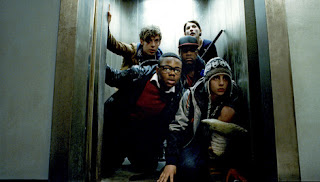 Super 8, which came out earlier, would make an awesome double feature with this film. Both of the films take the point of view from kids dealing with an alien invasion. Super 8 stands as an amazing love letter to Spielberg's early days while throwing in some of Abrams own sensibilities. Attack The Block brings the genre into the modern day. This isn't genre reinvention like Edgar Wright's Shaun of the Dead, but rather genre evolution. Cornish has a homerun on his hands and I'm very happy i got to share this with my boss and longtime friend. 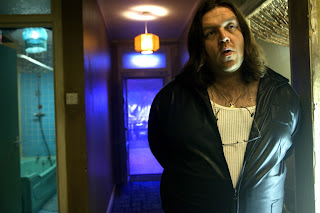 One last thought - Nick Frost makes an appearance as a drug dealer....all you need to know