True Grit: A Tale of Teenager, A Ranger and A One-Eyed Son of a Gun 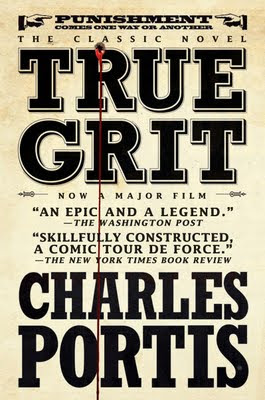 While I am an old "softy" for westerns in cinema, the same sentiment does not transfer to the written word. Then again, I have only read one other western work, Shane and I was young to say the very least. This might change however, if other works within the genre are on the same level as Charles Portis' classic (I am not "overselling" this book). Upon completing this novel, I kind of feel like a fool for not reading it sooner. In short, it is excellent novel and a notable title in the history of American fiction.

True Grit follows Mattie Ross in the wake of her father's murder in Fort Smith, Arkansas by a hired hand of his, Tom Chaney. Since the local authorities seem indifferent about the incident, Mattie decides to fund an "expedition" of sorts to apprehend Chaney, thus ensuring that her father is avenged. Ross then hires Reuben "Rooster" Cogburn based on his intrinsic "grit" and through a series of circumstance are joined by Texas Ranger, LeBoeuf. The trio track Chaney throughout the wilderness and inevitably reach their man.

I had previously been told of the wit employed by Portis in this novel and it really took away my fears about something that could be perceived as "stuffy." In addition, the prose and more specifically, the descriptions utilized make the story easy to imagine in the reader's mind. In some cases this might make the story simplistic but the detail and dialogue make True Grit a rich yarn. An example is the discussion between Rooster and LeBoeuf about how they spent the Civil War gives the impression of a wider world outside the confines of the novel.

True Grit was a refreshing departure from the normal reading habits of Manny Funkowitz and who knows might lead to the reading of different genres in the future... Still not sure about that, who wants to read 700 page fantasy epics (I am toying with the idea of reading Game of Thrones). Anyway, this novel comes highly recommended to any lady or gent that are currently experiencing a "lull" in their reading should give this tale of revenge a chance. After all, what do you have to lose by reading 230 pages of classic western goodness? I am so bold to say that everyone will like this novel... Yes, it is that good.

Posted by Manfred "Manny" Funkowitz at 1:35 AM